McGrath and Kennedy win Gold and Silver in Moscow 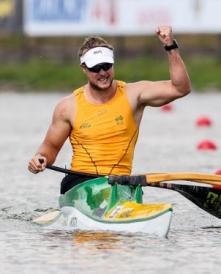 Australia has made a superb start on the opening day of the ICF Canoe Sprint World Championships in Moscow, Russia winning two medals.

Almost two years to the day since he lost both legs serving his country in Afghanistan, Curtis McGrath has won his first paracanoe world title.

“It is quite a special result and I am honoured to be the world champion,” McGrath said.

“It has been a lot of hard work, a lot of man hours, a lot of coach hours so it is really good to come away with a medal.”

Experienced paracanoeist Kara Kennedy followed McGrath’s lead to win silver in the V1 200 A final. Her second silver medal in as many years.

The popular Queenslander finished six seconds behind British paddler Jeanette Chippington who won the gold in 1:00.016.

Kennedy will also feature in the V1 200 TA final on Thursday after producing the third fastest time of 1:09.562.

After a successful international career in Para-equestrian, 28 year old Susan Seipel finished sixth in the K1 200 TA final. It was a great result for the Brisbane Canoe Club paddler who is making her debut this year.

Seipel finished three seconds behind British paddler Emma Wiggs who won in 53.128, less than a second ahead of Canadian Christine Gauthier and Nataliaa Lagutenko of the Ukraine.

Penrith kayaker Colin Sieders looks on track to improve on his seventh placing last year after recording the second fastest time in his K1 200 A semifinal.

The motorsport enthusiast recorded a time of 56.135 and will contest the final on Friday.

Also making it through to a Worlds final is debutant Amanda Reynolds.  The Victorian produced the second fastest K1 200 LTA heat time of 53.191 to qualify directly through to Thursday’s final.

After an injury ravaged 2014 Brock Ingram is hoping to achieve a top ten result in Moscow. Despite missing out on a place in the K1 200 LTA final by 0.191 seconds Ingram can still achieve his goal with victory in the B final on Thursday.

The action is set to intensify on Thursday with the able bodied athletes getting their first chance to challenge themselves against the world’s best.

Some of the key events on schedule include the coveted K1 1000 heats featuring Murray Stewart, Ken Wallace and Lachlan Tame in the K2 1000 and the K4 500 heats featuring Australia’s new quad of Cat McArthur, Alyce Burnett, Jaime Roberts and Bernadette Wallace.

The semifinals for all the mornings heats will follow from 9:30pm AEST.