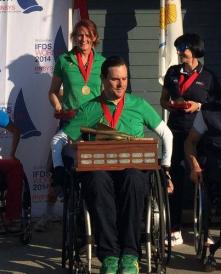 With these results Australia secured an early qualification of all three Paralympic Boat Classes for the 2016 Paralympic Games in Rio de Janeiro and topped the Nations Cup Scoring.  The IFDS Worlds 2014 regatta was held at the Royal Nova Scotia Yacht Squadron in Halifax, Nova Scotia, Canada Aug. 19-24th

It was the start of their Rio 2016 Paralympic campaign and Paralympic Champions Liesl Tesch and Daniel Fitzgibbon kicked it off with a bang.  Winning the SKUD-18 World Champion title for 2014 also meant the first World Championship win for the duo, who have their eyes set on defending their London 2012 Gold medal at the 2016 Rio Paralympic Games:

“It’s the first time we have ever won a World Champs.  It’s absolutely ‘fantabulous’ to be racing with Fitzy again – he’s a legend.  We had a great week but as our last race showed, we still have a lot of work to do on the water before Rio so it’s more a learning experience than a joyful victory”, said Liesl Tesch.

“It was great to have two other Aussie teams out there in the Skud fleet – it’s tougher than London and tougher every time we race.”

And commenting on a 13th place on the final race day, skipper Dan Fitzgibbon added:  “Today was a very tough day today for us.  We had some unfortunate luck, but we had enough points for the win.  The campaign is based on Rio and this was the first stepping stone.”

Securing the SKUD-18 World Champion for 2014 also meant the qualifying spot in this fleet for Australia.

For the Sonar fleet racing was cancelled on the last day.  With no racing yesterday’s results stood, which saw the Australian Sonar team of Russell Boaden, Jon Harris and Colin Harrison, coached by Grant Alderson, in third.

“We saw tricky racing conditions this week with a few ups and downs but it was nice to finish the regatta with a bronze medal and on the podium. It’s been a tough regatta so we are happy with the result.  Congrats to Dan and Liesel for winning the World Champs”, Russell Boaden said at the conclusion of the event.

With the top seven crews qualifying in the Sonar, Australia secured its second spot for the 2016 Paralympic Games.

London 2012 Paralympian Matt Bugg made this three by finishing fifth in the 2.4mR fleet and thus securing a qualifying a spot in this boat class for Australia as well.

“Today was a good day to finish the regatta with. I finished the race third and overall I was fifth. Fifth was enough to qualify Australia for Rio in the 2.4 class. so I’m happy about that. And after the shocking start I had I really am happy with the result.

Australian Peter Beard who came 12th in the Skud-18 together with 2008 Bejing Paralympic Silver Medallist Rachel Cox was awarded the Sportsmanship Award.

Halifax saw stiff competition with 24 countries represented at the event.  Forty-nine sailors were vying for the 2.4 mR title.  Fourteen teams of two raced in the SKUD-18 fleet and eighteen teams of three were on the Sonar course.

The 2014 IFDS World Championship was the first round of qualifiers for the Rio 2016 Paralympic Games.  A total of 39 sailors and 20 boats qualified for the first Paralympic Games ever to be held in South America.

The top ranking countries in each class pre-qualified for the Rio Paralympics in 2016: The first eight countries in the single-crew 2.4 mR class, the top five countries in the two-person, mixed-crew SKUD18 boats and the top seven triple-crewed Sonar boats were awarded places at the Rio 2016 Paralympic Games.

Another 35 sailors and 18 boats will have the opportunity to qualify for Rio 2016 at the 2015 World Championships, hosted by Australia.  The 2015 Worlds will be held in Melbourne from 26 November – 3 December at the Royal Yacht Club of Victoria in Williamstown.  The regatta will be followed by the ISAF Sailing World Cup in Melbourne.
Final Results for Australian Sailing Team & Squad:
Skud 18
Daniel Fitzgibbon (AST/NSW) / Liesl Tesch (AST/NSW) – 1st
Ame Barnbrook (ASS/NSW) / Brett Pearce (ASS/NSW) – 6th

For all results see here: ifdsworlds2014.ca/view-results

About the Event
The International Association for Disabled Sailing (IFDS) is the governing body that sets the competition criteria for disabled sailors around the world.  IFDS rules allow for adaptations to level the playing field for competitors, depending on their level of disability. IFDS is an affiliate member of the International Sailing Federation and the International Paralympic Committee.