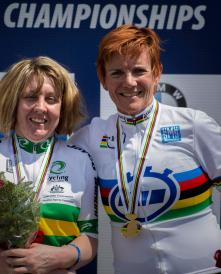 Canberra’s Sue Powell also picked up two medals from the championships, winning silver in the C4 road race and bronze in the time trial.

On the final day of competition in sweltering heat, Carol Cooke earned her second gold for the event, dominated the road race to finish over seven minutes ahead of main rival Jill Walsh (USA). Germany’s Jana Majunke rounded out the podium.

Photo with thanks to Cycling Australia