Australian women’s goalball on the up 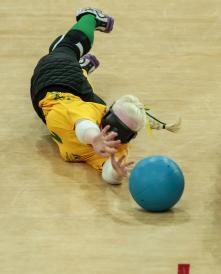 The Australian women’s goalball team have continued their progress on the international stage, with an impressive showing at the recent Japan Goalball Championships.

Having achieved solid results at the World Championships earlier this year, the Belles took the opportunity to blood some new talent in Japan and along with the more senior players, the squad didn’t disappoint.

Led by Jennifer Blow, who made her debut as Australian captain, the Belles played a new style of defence that is better suited to the faster, stronger style of play seen across the world in recent years.

The offence was led by Adelaide’s Rachel Henderson, who scored six out of the eight goals in the tournament, with Michelle Rzepecki and Elise Kerle scoring their first international goals to make up the eight.

The Belles contested six matches throughout the week, winning two of three games against Japan B, and putting on a strong fight against Japan A in all three games, resulting in second place. Japan are the reigning Paralympic champions.

Australian Belles team manager Cathy Lambert said that after their performance at the World Championships, the Belles took feedback on board, adapted and used the tournament as an opportunity for them to practise new ideas.

“It was exciting to see the enthusiasm that these girls played with and their willingness to embrace change and move away from what has been comfortable for them,” she said.

“We are now seeing a more athletic style of play with faster throws and bounce balls. In order to be competitive on the world stage, the APC’s women’s goalball program is in the process of transitioning into a new style of defence that is better suited to the increased pace of the modern game, and at the same same time, improving the throwing of our whole team.”

The Japan Goalball Association hope to grow the Championships annually  in the lead up to the 2020 Tokyo Paralympic Games.

The Australian women’s team will now turn its attention to to the 2015 IBSA Goalball World Championships in Seoul, Korea which will be their first chance to qualify for the Rio 2016 Paralympic Games.