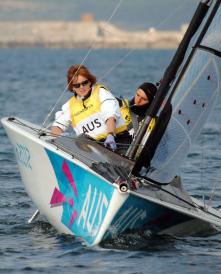 Five Australian Sailing Team (AST) and Squad (ASS) crews will contest the SKUD18, 2.4mR and Sonar at this regatta, which is also a qualifying event for the 2016 Paralympic Games.  Event organisers have confirmed an entry of 47 in the 2.4 mR class, 14 SKUD-18s and 16 Sonars.

In the SKUD-18 Liesl Tesch and Daniel Fitzgibbon are looking forward to kick-starting their 2016 Paralympic campaign as Fitzgibbon explains:

“This will be our first international regatta together since the 2012 Games and it’s exciting times.  We’ve done a few little regattas here and there, but this will be the kick-off to our intensive program towards Rio.  Halifax will be a great gage to see how we compare to the other countries that have been doing a lot of training while we had a bit of break and I’m looking forward to get back into it.  The campaign is based on Rio and this is the first stepping stone.”

Liesl Tesch shares her skipper’s excitement and is looking forward to getting back amongst it:  “It will be great to be in the international fleet again and to sail against the best teams in the world!”

“It’s the start of the campaign and for us it will be about getting back on the water, amongst that really tough competition and to see how everyone has changed over the last two years.”

“I have done some racing with other skippers over the last year and it’s exciting to be back in the boat with Dan for this international event.  Our last bit of preparation has been very intense and good so we are pretty happy with where we are at.  We had great training partners in Sydney with Ame and Brett and to get out there again amongst the best of the World will be challenging and exciting.”

In the lead up to the Rio 2016 Games there will be a number of qualifying events and Dan and I will have to come out on top to be able to go to Rio.  Halifax is one of those events and will be especially important as far as the other Aussie competitors go.”

For Australian Sailing Squad members Amethyst Barnbrook and Brett Pearce, who were selected into the Squad in March 2014, Halifax will be the first international competition together.  While Barnbrook is a returning athlete to this class, it is a new boat for Pearce as skipper Ame Barnbrook explains:  “Brett has never competed with me in a World Championship so it’s our first time to compete together internationally, which should be great.  We hopefully will make top seven, that’s what we are aiming for.

And Brett Pearce adds:  “Ame is very talented and I’m just learning the boat but we are getting there and each time we get on the water we learn new things.  We’ve been working hard and will do the best we can and maybe surprise a few people.”

In the 2.4mR, London 2012 seventh placed Tasmanian sailor Matt Bugg is aiming for the medal podium while a top seven finish will be enough to qualify Australia as a nation for a place in the restricted fleet for the 2.4mR class at the Rio Paralympics.

Buggs recent results in European regattas, including a third rank at the Sail for Gold Regatta in Weymouth, ranks him a top prospect at the Canadian regatta.

Halifax will also see Paralympians Russell Boaden (WA), Jon Harris (NSW) and Colin Harrison (WA) take to the waters on their road to Rio and with the aim to qualify Australia for the Paralympic Games in 2016.

There are two races scheduled daily until Saturday, depending on the weather.  A championship race is scheduled for Sunday, Aug. 24th with the World Championship and trophy presentations to follow racing at approximately 18:00 local time (7 a.m. AEST, Monday 25th August).

About the Event
The International Association for Disabled Sailing (IFDS) is the governing body that sets the competition criteria for disabled sailors around the world.  IFDS rules allow for adaptations to level the playing field for competitors, depending on their level of disability. IFDS is an affiliate member of the International Sailing Federation and the International Paralympic Committee.

The top ranking countries in each class will pre-qualify for the Rio Paralympics in 2016: top five in the Skud 18, top seven in the Sonar and top eight in the 2.4mR.

Twitter feeds from the race courses will be available @IFDSWorlds2014.

Daily releases will be issued at the end of racing and results will be published daily on the event website: ifdsworlds2014.ca. Daily video reports can be viewed on the event Facebook page “Disabled Sailing World Championships”.