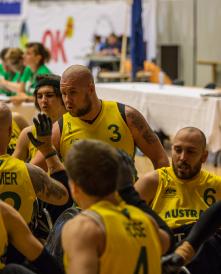 The Australian Steelers have advanced to the gold medal match at the 2014 IWRF Wheelchair Rugby World Championships with a 60-49 semi-final victory against Japan overnight.

The Steelers will now face Canada for the world championship crown at Arena Fyn in Odense, Denmark in what will be a replay of the London 2012 Paralympic Games final.

Canada progressed after upsetting the reigning world champions, Team USA, in the other semi-final. The Canadians won 59-56 in overtime after the scores were locked at 54-all at full-time.

For the Australians, their 11-goal semi-final win over a gallant Japan has given them a long-awaited chance to re-write history.

Despite being Paralympic champions, the Steelers have never won a world championship in the sport of wheelchair rugby.  It’s a record Australian captain Ryan Scott said his team will be desperate to amend, when the gold medal match tips off at 12am Monday (AEST).

“Obviously we’ve never won a world championship before and that hurts,” Scott said.

“Some guys on this team are going to be around for many years and might get another crack at winning more World Championships but for some of us, this could be our last chance to win it.

“I want this group to be the guys making history. We want that world championship gold to go with our London Paralympic gold before we start focussing on Rio 2016.”

Scott said the Australians had expected to meet the United States in the decider, which would have pitted the world’s top two ranked teams against each other.

But Canada’s highly composed overtime victory showed why the Australians will be taking nothing for granted.

The Australian skipper was also quick to point out that the 68-61 victory over the Canadians in their pool match on Friday counts for nothing.

“To be completely honest, I’m a little bit disappointed not to be playing the USA, but Canada are going to be such a tough opponent for us,” Scott said.

“We have seen how much homework they have done, and when they come out on court, they always have very good tactics.

But Scott said the Australians will enter the decider in excellent shape with all their line-ups in strong form.

Along with the starting four of Ryley Batt (32 goals), Chris Bond (15), Nazim Erdem and the captain (1 goal), there were excellent contributions by Curtis Palmer (1 goal), Cameron Carr (2 goals) and young gun Jayden Warn (9 goals) off the bench.

“It’s a massive win for us. It is always very tough playing against Japan, but even more so in a semi-final of a world championship, but we matched them really well today,” Scott said.

“This is where we wanted to be and it was great to through. Everyone has done their jobs, but we know we still have one game to go.

“Canada have a lot of big game experience which makes them tough, but we also have quite a few experienced guys who have been there in the biggest games before. Between three of our starting four, we have 600 [international] games under our belt.

“So we’re confident they we have what it takes to beat them, but we also know that it is going to be a very hard four quarters of rugby.”

After Japan and the United States do battle in the bronze medal match at 22:00 on Sunday, Australia plays Canada at 00:00am (AEST) for the gold medal at the 2014 IWRF World Championships.