A statement from Greg Hartung AO

Greg Hartung, President of the Australian Paralympic Committee from 1997 until 2013, has paid tribute to Marie Little following her passing yesterday. 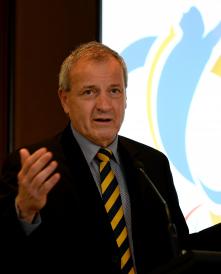 Mr Hartung said his former colleague will be dearly missed by those who knew her, particularly the many people she touched through her tireless work with the Paralympic movement and for athletes with an intellectual disability.

“Marie Little was a rare gem.  She was tough and resilient – and she had a heart of pure gold,” Mr Hartung said.

“Marie was truly authentic – there was nothing phoney or fake about her.  She never shirked what she saw as her duty to defend and protect those less able to do it themselves.  She knew what needed to be done, and she did it without fear or favour.

“Over the decades that I knew Marie, she was never afraid to go out on a limb for what she believed.  When others might have taken the easy way, Marie took the road less travelled.

“High on the list of Marie’s personal traits were integrity and courage.  She may not have been text book in her approach, but she knew instinctively what leadership demanded.  This was evident in the way she championed the interests of athletes with an intellectual disability, in Australia and internationally.  It was about serving, not ruling!

“She had a fundamental commitment to fairness and was able to tell the difference between right and wrong. Her contribution to sport, and especially to athletes with an intellectual disability, will be one of her lasting legacies.

“My thoughts are with her family and friends.