The Australian Rollers suffered their first defeat of the 2014 IWBF World Wheelchair Basketball Championship, going down to the USA 67-57 in their final group stage game today in South Korea.

After a narrow victory over Turkey, the Rollers five-game winning streak to start the tournament came to an end, with a 15-4 second quarter ultimately proving the difference.

The Rollers’ tournament top scorer was at it again, with Shaun Norris posting a game-high 28 points to go with six rebounds in the 10-point defeat.

In what shapes as a potential medal round meeting, the two teams played out a high-scoring and entertaining first quarter as offenses dominated, giving the USA a slight 19-17 advantage.

The points kept flowing for the USA (15 points in the second period), but stopped for the Rollers with a combination of strong defensive pressure and poor shooting restricting the Australians to just four points – their lowest-scoring quarter of the tournament.

Defeat seemed inevitable as the Americans raced out of the blocks to start the second half, establishing a 19-point lead midway through the third quarter.

However, the Rollers began to peg back the deficit and went into the final period just five points down at 50-45 and in contention for a remarkable comeback.

The end of quarter break appeared to scupper the Rollers momentum and the USA were able to regroup and hold on to record a hard-fought victory. 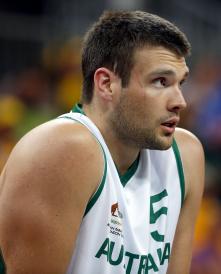 ball Championship challenge at the quarter final stage with the opponent to be confirmed.

For all the latest information on the Rollers quest for back-to-back IWBF World Wheelchair Basketball Championship be sure to visit the BA website at basketball.net.au.