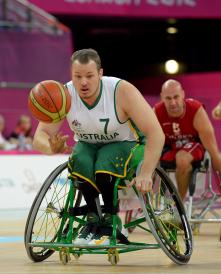 The Australian Rollers have advanced to the Gold Medal Game at the 2014 IWBF World Wheelchair Basketball Championship in South Korea.

Showing unbelievable  spirit, the Rollers came back from 20 point deficit at half time to defeat Turkey 63-58 tonight.

The amazing come-from-behind victory sets up a final against the USA, with the Rollers looking to defend their 2010 World Championship and exact revenge on the team that inflicted their only defeat of this tournament.

In one of most remarkable comebacks seen at the tournament, the Rollers found themselves in a massive hole at the main interval, trailing Turkey 42-22 as the Europeans looked certain to advance to the final.

Staring down the face of a humbling defeat, and elimination from gold medal contention, the Rollers lifted in the third quarter as Justin Eveson and Shaun Norris began to assert themselves on the contest.

Eveson (20 points and five rebounds) and Norris (21 points, eight rebounds and four assists) were the inspiration from the offensive end, while the team restricted Turkey to just five points for the third quarter.

This reduced the margin to just eight points heading into the final term, with the momentum firmly in the Australians corner.

Smelling blood, the Rollers produced a brilliant final quarter performance, posting 24 points (more than their first half total) and restricting their opponents to just 11 points.

Turkey made the Rollers earn the victory, with the scores only levelled with less than three minutes remaining – this was part of a 12-3 run by the Australians that ensured victory.

Next up is a battle with the USA for the World Championship crown, with the Americans the only team to inflict a defeat on the Australians in the tournament.

For all the latest information on the Rollers quest for back-to-back IWBF World Wheelchair Basketball Championship be sure to visit the BA website at basketball.net.au.