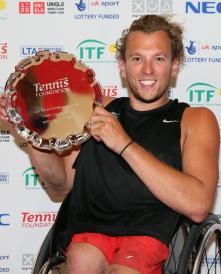 It is the 23-year-old’s biggest title triumph since making his senior World Wheelchair Tennis Tour debut in January, having clinched the New Zealand Open in just his second tournament appearance.

The British Open is one of six events to have Super Series status, which is the highest tier of tournament on the UNIQLO Wheelchair Tennis Tour outside of the Grand Slams.

Alcott, a former leading junior wheelchair tennis player, only picked up a racquet again 12 months ago after focusing on basketball, collecting a gold medal with the Australian Rollers at the 2008 Beijing Paralympic Games and silver at London 2012.

Since his victory in the final of the New Zealand Open, Alcott had lost four title deciders, including the French Open last month, on the way to reaching number four in the world rankings.

“To win the British Open, one of the biggest tournaments on the calendar, a year into my comeback is not bad – I’m pretty happy.”

Alcott said bringing his basketball attitude with him onto the tennis court has been key to his remarkable rise up the world rankings.

“I’ve come out of nowhere, but I have really trained my butt off for this,” said Alcott. “In basketball you learn how to train, you are in a team sport where you are accountable.”

His basketball know-how proved particularly important at the Nottingham Tennis Centre with play forced indoors because of inclement weather.

“It was hot indoors, but after ten years of basketball I was confident that I had the strength, endurance and chair skills to get through it,” said Alcott.

The Australian is due to return to the East Midlands in November for the Nottingham Indoor Wheelchair Tennis Tournament in the lead up to the NEC Wheelchair Tennis Masters, the year-end singles championship, which takes places at Lee Valley Hockey and Tennis Centre in the Queen Elizabeth Olympic Park.