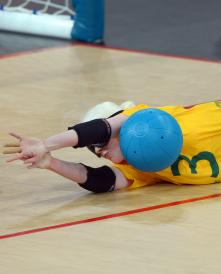 Australia can still progress to the quarter-final stage of the 2014 IBSA World Goalball Championships in Finland, despite a 6-2 loss to Israel overnight.

The Australian Belles remain winless after their first two pool matches, but need only to finish in top four in their six-team pool to move into the elimination rounds.

Though the odds are stacked against them, strong performances against world number two China and world number 19 Ukraine in tonight’s double header should be enough to see them through.

It was a critical lapse in concentration in their match against Israel that proved the difference overnight in Espoo. After an arm-wrestle in the first-half that saw the Israelis take a 2-1 lead into the break, the Australians conceded three goals in just 57 seconds shortly after the resumption.

Suddenly finding themselves down 5-1, the Belles fought hard to stay in the contest and soon replied with Meica Horsburgh’s second goal of the game. But when Israel scored with a penalty throw with less than five minutes left on the clock, the gap for Australia became insurmountable.

“Clearly there remains work to do to adjust to the pace and style of the game at these Championships,” Australian coach Peter Corr said.

“As a team, we remain committed to improving each game and we’re looking forward to a demanding day with important matches against China and Sweden.

“We understand that by continuing our improvement, we are still in a position to play off in the quarter finals.”

The Belles face China tonight at 7pm (AEST) and then back up to face Sweden at 1:00am (AEST).

All World Championship matches are being live streamed here: http://www.goalball2014.fi/index.php?page=webtv