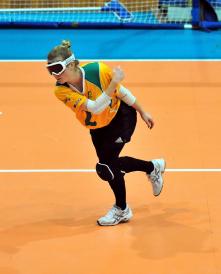 The Australian women’s goalball team will be looking to bounce back at the IBSA World Championships in Espoo, Finland, after going down 9-5 to Brazil in their opening match overnight.

Ranked 6th in the world, Brazil entered the match as strong favourites against the 11th ranked Australians and lived up to the hype by racing to a 5-2 lead at half-time.

But despite a better second half performance from the Belles, the Brazilians always remained in control on their way to the impressive four-goal win.

For Australia, Tyan Taylor and Nicole Esdaile both scored two goals, while Meica Horsburgh netted one.

The Championships continue later today with Australia facing Israel, who will be brimming with confidence after holding London 2012 silver medallists China to a 4-all draw in their opening clash.

China were expected to breeze past the Israelis, ranked 14th in the world, but after scores were locked at 2-all at the half-time break, both teams traded goals in the second stanza but were unable to land the decisive blow.

In their second game of the Championship tonight, a win against Israel will be a massive boost for the Australians, who need to finish in the top four of their six-team pool to progress to the quarter finals.

All World Championship matches are being live streamed here: goalball2014.fi/index