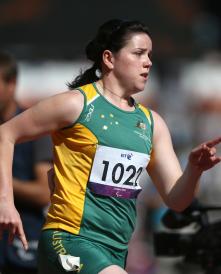 Australia’s Para-sport athletes are pulling their weight when it comes to helping Australia stay on top of the medal tally at the Glasgow 2014 Commonwealth Games.

After four days of competition, Australia’s Para-athletes have won four gold, four silver and six bronze medals, or almost half of the 30 Para-sport medals that have been on offer.

The gold medal haul continued overnight, with Paralympian Jodi Elkington soaring to victory in the women’s F37/38 long jump. Incredibly, all six of Elkington’s jumps were better than those of her nearest rivals.

“When they said it was 4.39m I couldn’t really believe it, to finish off like that,” an elated Elkington told athletics.org.au

“I was a little bit disappointed my last one was my best one.  I wish it was a little earlier to give me my confidence but I did get a 4.36 out there which then also gave me confidence.

“I think I won with all my six jumps.  To take that away again it’s very good given it’s my first international competition with long jump.  My aim was 4.40, I was one centimetre off.  Even getting over the 4.30 twice I was really happy with that.”

Para-sport events contribute to the overall medal tally at the Commonwealth Games. Australia has won 73 medals after four days of competition – 26 gold, 21 silver and 26 bronze.