A four year journey of improvement for Elkington 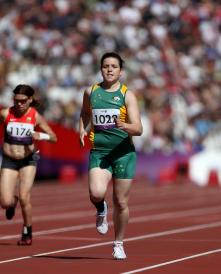 It’s amazing what a difference four years can make.

In 2010, Jodi Elkington (NSW) was a fresh-faced 17-year-old competing at her first Commonwealth Games in the para-athletics 100m for athletes with cerebral palsy. She was excited to wear the green and gold, but nervous too, and she kept a close eye on how more senior athletes went about their preparation to compete so that she returned to Australia a better athlete from the experience.

In 2014, Elkington will descend on Glasgow (SCO) with international starts not only from Delhi 2010, but also the 2011 IPC Athletics World Championships and the London Paralympic Games. Her event will instead be the long jump, and importantly she will arrive at the Athletes’ Village with an acute awareness of how to ready herself as best as possible for the straight final of her event on day one of athletics competition (27 July).

“Delhi was such a big stepping stone for a future that eventually included the chance to compete at the IPC World Championships and the London Paralympics. To get the experience of being part of a senior team and learn how other athletes prepare was amazing, and despite a couple of little negatives I wouldn’t change a thing,” Elkington said.

“I know now that no one can take your Australian uniform away from you, and to have had the chance to wear it at three major competitions is incredible. It’s been a fantastic opportunity for me and one that every athlete on this team should be so proud of.”

Elkington, who is coached by Olympic long jumper Nicole Boegman-Stewart, will also take to the runway at Hampden Park as one of the favourites for a medal.

Her personal best of 4.37m, which was set in Canberra (ACT) earlier this year, ranks her within the top-five in the world and only last weekend she soared to 4.36m at the Downunder Meet on the Gold Coast (Qld) to ensure that she departs Australia brimming with confidence in her preparation.

“To be ranked as one of the best headed to Glasgow is a new situation for me. I think that if I perform as well as I know I can then I can hopefully come home with a medal, and conditions permitting, a new personal best,” Elkington added.

“I’ve been very happy with my preparation. All of my jumping has been around my best in relatively still conditions, so if the winds in Glasgow are kind I am confident that I can jump something big.”

Roberts is making his open age major international championship debut after narrowly missing the 2012 London Paralympic Games and knuckling down to ensure his selection to the team this time around.

A training partner of Paralympic medallist Gabriel Cole under Steve Butler in Adelaide, the communications student is keen to make his mark on the T37 100m for athletes with cerebral palsy as he looks ahead to the IPC Athletics World Championships in Doha (QAT) next year and the Rio Paralympic Games the year after.

“It’s a childhood dream to wear the green and gold. I’m very much looking forward to it,” Roberts said.

“I just missed London, and also the World Championships last year, and since then I’ve worked really hard to become a better athlete, who works harder, and does all that’s needed to earn selection. This opportunity is about making the most of my ability after what I now see as mediocre attempts to earn my spot in the past. I want it to be a stepping stone towards bigger and better things in the future, with Rio the big goal long term.”

Like Roberts, Anderson and Pardy are also making their debut at the Commonwealth Games, while Raison and Elgin are the team’s elder statesmen.

Elgin’s selection is his first since Melbourne 2006 and his international resume includes multiple IPC Athletics World Championships and Paralympic Games including Sydney 2000. Raison is a dual Paralympic medallist from Beijing 2008 where he competed in both the shot put and the 4x100m relay for leg amputees.

Australia’s wheelchair racing squad is arguably the most outstanding of any of the competing nations. The six starters have won a combined total of 28 Paralympic medals, including six gold, and a further 20 from the IPC Athletics World Championships. Fearnley and Colman are also the defending gold and silver medallists respectively in the men’s T54 wheelchair 1500m from Delhi 2010.

Stay connected with the Australian athletics team by checking the regular updates on athletics.com.au, or by joining the conversation on Twitter by following @AthsAust and using the hashtag #Glasgow2014.