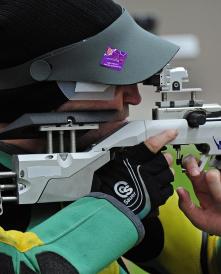 Maroney qualified for the finals comfortably on a total of 636.1 points.

Adams placed 11th in the qualification round of his second event – R7 (50m Rifle 3 Positions Men), on a score of 1143, three points shy of a spot in the eight-person final.

In the R3 (10m Air Rifle Prone Mixed) event, Aussies Ashley Adams and Anton Zappelli (Willagee, WA) finished in 12th and 13th place respectively, after the Qualifying Round, within 0.4 and 0.7 points of the eight-person final.

Shooting Australia CEO Damien Marangon congratulated the team on their efforts.
“Making the finals at a World Championship is a great achievement, so well done to Ashley, Jason and Libby. The team fought hard and I applaud their dedication,” Marangon said.

Shooting Australia is strongly supported by the Australian Government, through the AIS.