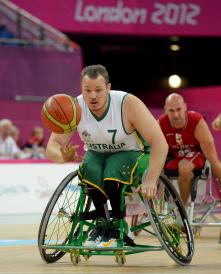 The Australian Rollers men’s national wheelchair basketball team have named their final 12 players who will represent Australia at the 2014 IWBF World Championships in South Korea.

Heading to South Korea as the defending World Champions, the Rollers have named a squad littered with major international tournament experience, including eight players who claimed silver at the 2012 London Paralympic Games.

“When you look at the likes of Brad Ness, Justin Eveson, Shaun Norris, Tristan Knowles and Michael Hartnett – you’ve got a core group who have played more than 150 times for their country on the biggest stages our sport has to offer,” Ettridge said.

“These players understand what it takes to succeed at a World Championships and Paralympics, and will provide the leadership and direction to our younger players.”

A lot of excitement surrounds the young talent in the Rollers program, with the likes of Jannik Blair and Bill Latham already sporting Paralympic medals in their trophy cases.

They lead a new generation of talent who will get their chance to shine on the international stage, according to Ettridge.

“In Jannik and Bill we have two players with significant international experience, despite their relative youth,” Ettridge said.

“These guys are the leaders for the young players like Adam Deans, Luke Pople, Josh Allison and Tom O’Neill-Thorne, who will get their first taste of a World Championship tournament in South Korea.

“They have all proven they belong in the final 12 and I can’t wait to see them show the world that the next generation of Rollers will ensure the program remains among the world’s elite.”

Less than a month out from their opening game of the 2014 IWBF World Championships, the Rollers came together last week for the final time before they depart for South Korea, with Ettridge impressed by the intensity and focus of the group.

“Over the weekend, the excitement grew amongst the players – you could see the reality of what is around the corner dawning on them,” Ettridge said.

“Our first session on court was meant to be a light shoot around, and before we knew it, we were getting competitive up and down the floor – at that point we knew then the guys were locked in for this camp.

“Our scrimmages were as competitive as I have seen in 18 months. We looked sharp and the chemistry we wanted was there.”

Ettridge will be joined by Craig Friday and Luke Brennan to form his coaching staff for the tournament, with Friday bringing two Paralympic Games experience to the staff, while Brennan to join the program for his first major tournament.

The Rollers will face European trio Germany, Sweden and Italy in their preliminary round games, in the pool dubbed the “group of death” by many observers.