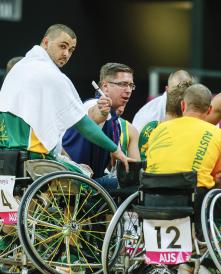 The defending IWBF Wheelchair Basketball World Champions, the Australian Rollers men’s national team, descend on Melbourne this week for what shapes as a defining four-day camp, tipping off today.

Coming into camp for the first time since their successful tour of Europe, the Rollers will look to finalise the 12-man roster that will be hoping to secure back-to-back world titles at the 2014 IWBF World Championship in South Korea next month.

The 20-strong squad, comprised of several players brought in to add training numbers, will come together in Melbourne at the state-of-the-art Australian Paralympic Committee (APC) at Essendon Airport, the home of the Essendon Football Club.

Australian Rollers Head Coach Ben Ettridge said with the World Championships coming into focus he expects the intensity levels to reach new highs as the squad looks to prepare for what awaits in South Korea.

“The focus of this camp is to fine tune our combinations and roles within the team, on and off the court,” Ettridge said.

“This will be the first and only time since London we have had the final 12 guys in a room together. It’s amazing to sit back and process that, when you look at the team’s record since then.”

After a series on home soil against Brazil fell through, Ettridge said while the preparation is not perfect, his troops have the fortitude to overcome any obstacles.

“We considered the London lead in to be as perfect as we could possibly be,” Ettridge said.

“This time around we are a little behind where I would like the team, with that being said, we pride ourselves on thriving in adversity.”

The Rollers enter the World Championships as one of the most successful teams in men’s wheelchair basketball over the past decade, having won three consecutive Paralympic medals (2008, gold; 2004 and 2012, silver) and medals at the past two IWBF World Championships (2010, gold, 2006 bronze).

This extended period of success has entrenched the Rollers as one of the most respected programs in Australian sport, with few national teams able to replicate the success of this team.

Rather than considering it a burden on his group, Ettridge sees the expectation of success as a way to ensure his team doesn’t rest on its laurels and continues to strive to be the best in the world.

“The Rollers have had a massive target on their backs for many, many years now,” Ettridge said.

“Every time we roll across the white line with Australia written across our chests, we carry the expectations with us.

“While we are proud to do this, and we will fight to the end, we don’t have much time to worry about the expectations of others. When you get caught up with what the people in the stands are thinking, before not to long you are sitting alongside them.

“Our expectations of each other and the team are all that matters.”

The Australian Rollers are in camp at the Australian Paralympic Committee training facility in Melbourne from 5-8 June, with the final 12 to compete at the 2014 IWBF Men’s Wheelchair Basketball World Championships to be selected.