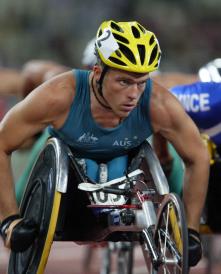 To mark its 25th anniversary this September, the International Paralympic Committee (IPC) has launched (16 June) a global search to find the public’s favourite moment from the Paralympic Movement of the last 25 years.

Taking place between 16 June-25 July, anyone can nominate their favourite moment of the last quarter of a century via a special website www.ipc25.com, dedicated to the IPC’s landmark anniversary.

The moment can cover anything from a Paralympic Games, world or regional championships, or even be away from the sporting field of play. Everyone who takes part will be entered into a free prize draw to win a once in a lifetime five-day trip for two to the Rio 2016 Paralympic Games.

Following the closing date for nominations, the IPC Governing Board, led by its President Sir Philip Craven, will review all the entries and choose what they believe are the Top 25.

Then, from 29 August, the IPC will start a daily countdown via www.ipc25.com, revealing a different moment each day, until the number one moment from the last 25 years is revealed on 22 September.

Craig Spence, the IPC’s Director of Media and Communications, said: “The #IPC25 campaign is one of many initiatives we are organising this year to celebrate the IPC’s silver jubilee.

“We want the public to share in our celebrations and this is one way of doing so. Since the IPC was formed 25 years ago there have been many great and memorable moments within the Paralympic Movement. We want to find the best one.

“#IPC25 is a very interactive and social campaign. People can enter via the website www.ipc25.com and are encouraged to share their memories on Twitter using #IPC25. In August we will launch an interactive map plotting all the entries received. This means that in addition to finding out the Top 25 Moments, website visitors can also read and share other peoples’ favourite para-sport moments from around the world.”

The IPC was formed on 22 September 1989 at a meeting in Dusseldorf, Germany. More than 200 participants from 42 countries attended the historic event which created the Paralympic Movement’s global governing body.

Founding members of the IPC were CISS, CPISRA, IBSA, INAS-FMH, ISMGF and ISOD and the organisation’s first President was Bob Steadward who remained in the position until 2001 when Sir Philip Craven took over the role.

Although formed in 1989, the Lillehammer 1994 Paralympic Winter Games were the first Paralympics for which the IPC was fully responsible.
Today, the IPC is based in Bonn, Germany, employs 75 people full-time and has over 200 members.
Its vision is `to enable Paralympic athletes to achieve sporting excellence and inspire and excite the world.’

In addition to supervising the organisation of the summer and winter Paralympic Games, the IPC also serves as the International Federation for nine sports, for which it supervises and co-ordinates the World Championships and other competitions.

The summer Paralympic Games is now regarded as the world’s third biggest sporting event in terms of ticket sales with only the Olympic and FIFA World Cup selling more.  At London 2012, a record 2.78 million tickets were sold and the global cumulative TV audience was 3.8 billion.