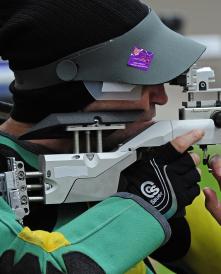 The title holder from the opening World Cup of the year in Stoke Mandeville, Great Britain, Maroney shot an outstanding qualification score of 636.1 to set a new official world record on his way to the gold medal.

The previous world record holder was Michael Johnson of New Zealand who had set the record with 634.0 on 23 Oct 2013 in Alicante, Spain. Maroney qualified for the final with the highest score, and shot his way to the top spot with a score of 209.0.

Fellow Aussie Bradley Mark (Alexandra Hills, QLD) shot a strong score of 633.5 to qualify for the final with the second highest score. He then shot a score of 187.5 to take the bronze from Canadian Doug Blessin.

On the opening day of the World Cup, 25m Pistol shooter Chris Pitt (Bundaberg, QLD) began the medal count for Australia with a silver medal in his event.

Pitt shot 567 in the qualification round, just five points behind USA’s Michael Tagliapietra on 572. He went into the final in second place, and then shot 13 points to qualify for the gold medal match.

In an exciting final, Pitt lost 2-8 to Sweden’s Joackim Norberg, winning the silver medal for Australia.