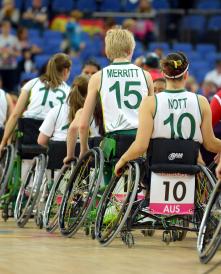 Ahead of their opening game of the World Championships in Toronto, Canada, the Gliders head to Germany and The Netherlands for a series of games against medal-calibre opposition that will have the team battle hardened for their opening fixture against the USA.

The first stop for the Gliders is Germany, where they will take part in the World Super Cup of Wheelchair Basketball in a two-day round-robin tournament against 2012 London Paralympic gold medallists Germany and bronze medallists The Netherlands on 7-8 June in the city of Frankfurt.

After four games in two days, the Gliders will head west to Holland, where they will base themselves for a week from June 10, training and playing practice games against the Dutch national team.

Australian Gliders Head Coach Tom Kyle said his team is ready for the challenge ahead and believes the European preparation is the perfect lead-in to the World Championships.

“For the team it’s all about game play at this point of the preparation,” Kyle said.

“We’ve got the skills, we’ve got ability – the coordination of the team into game play situations is the focus now.

Kyle announced his team for the 2014 IWBF Women’s World Wheelchair Basketball Championships last month, naming a final 12 with plenty of international experience, including nine players from the team that claimed the silver medal at the 2012 London Paralympics.

Coming off an outstanding tour of Canada and the USA in March, Cobi Crispin and Amber Merritt will be eager to further enhance their growing reputations as two of the premier players in women’s wheelchair basketball.

Kyle included two players who will make their major tournament debuts in Canada, with the exciting duo of Stephanie van Leeuwin and Shelley Cronau earning the chance to help the Gliders end a 12-year World Championship medal drought.

It has been a significant medal drought for the Gliders on the World Championship stage, reaching the semi-finals, but no podium finish since 2002 – missing out on medals at the 2006 and 2010 tournament.