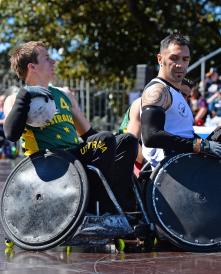 Only six members of Australia’s London 2012 Paralympic gold medal winning wheelchair rugby team will line up for next week’s Canada Cup, with head coach Brad Dubberley set to trial a series of new combinations ahead of the IWRF Wheelchair Rugby World Championships in August.

With two such experienced and strategically-minded 0.5 players in Scott and Erdem, combined with the speed and agility of two of the world’s best 3.5 players in Batt and Bond, Australia has often relied on this winning on-court combination in the big games. But Dubberley says the team now has to evolve and develop more depth if it wants to win its first world championships later this year and back-to-back Paralympic gold in Rio 2016. The Canada Cup campaign is the starting point.

“For us at Canada Cup, we’re not focused solely on winning but rather developing the team for world champs,” said Dubberley.

“It’s a very different team to the one that won gold in London and with so many newer faces, the young guys are trying to make their mark, earn their court time and because of that, are trying really hard. It’s exactly what I want to see.

“We’ve got a few new line ups using the mid-point players that we want to test out next week, and we also have Matt Lewis on board as another 3.5 which will give Ryley and Bondy more recovery time off court.”

Australia finished in third position at the 2012 Canada Cup, and enters this year’s tournament ranked number two in the world, behind the USA, who will not be contesting the 2014 Cup. Australia will open the tournament against Switzerland next Friday (AEST), followed by Great Britain and Sweden before hopefully moving through to the knock-out games.

“With so many new guys in the team, there is no complacency about where we sit on the rankings ladder, especially because we’ll be trying out a few different things, and that’s exactly how I want the guys feeling heading into world champs.”

Australia has never won a world championship title – something that Dubberley desperately wants to tick off his list of achievements, which includes 94 wins from 115 games as Australian head coach.

“I want to be the first Australian wheelchair rugby coach to win our country the world championship, and I want our team to not only win now, but back up in Rio and the next world champs in 2018. It’s  rare to win both the world champs and the Paralympics,” he said.

“Which is why it’s so important to get our combinations right at Canada Cup, so come world champs time in a few weeks, we are ready to win.”

You can watch the Canada Cup games live at: http://www.sportscanada.tv/wheelchairrugby/

Game schedule (all times are local to Richmond, Canada)