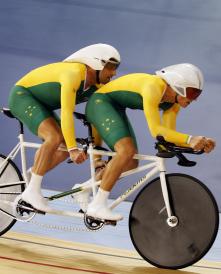 Four Para-cyclists, including two Paralympic gold medallists, and four sighted pilots have been named on the Australian cycling team for the Glasgow 2014 Commonwealth Games – the first Games to include tandem Para-cycling on the competition program.

“Having the Para-cycling team join the team for Glasgow will be a new and extremely positive experience for us, and we also have many debutants heading to Glasgow with big ambitions.”

Seven-time Paralympian Kieran Modra is a legend of Australian Para-cycling and has won the 4km individual pursuit at three consecutive Paralympic Games, most recently in London with pilot Scott McPhee. Modra will be joined by fellow South Australian, and sprint queen Felicity Johnson, who is not only the current Paralympic champion in the 1km time trial but was also the 2012 world champion.

Brandie O’Connor will make her sixth Australian team off the back of impressive performances at April’s UCI Para-cycling Track World Championships in Mexico where she won two silver medals, while Paul Kennedy, will take a break from international goalball to return to the track for his second Australian team.

The 2010 Commonwealth Games in India proved to be Australian cycling’s most successful in history with 21 medals, including 14 gold, and Tabotta expects tough competition in all disciplines in Glasgow.

“Glasgow will surely be our greatest challenge with superb depth of fields, so the quality of competition will be first-rate and our team is preparing hard to challenge for podium spots.”

The Commonwealth Games begin 23 July through to 3 August and will be broadcast on TEN, ONE and channel 10’s online offering, tenplay.