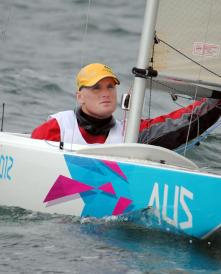 A range of conditions were thrown at the sailors across the five days of racing (7-12 June 2014) and on the final day an easterly 20-25 knots with gusts reaching 30 knots made for an exciting final day of racing.

While the regatta was most of all a British affair, racing was close and tough and a welcome benchmark for Bugg with two of the best 2.4 sailors in the world, Paralympic Champion Helena Lucas and fellow Brit Megan Pascoe, competing in Weymouth in what was a selection regatta for Rio for them.

Heading into the final two fleet races in the 2.4mR event, Paralympic champion Helena Lucas harboured a one-point lead over Pascoe while Matt Bugg went into the final race day in third.  In the strong easterly breeze it was Pascoe who came out all guns blazing to take a clean sweep of final-day race wins and the 2014 Sail for Gold title.  A third and second from the last day left Lucas in the silver medal position, while Matt Bugg rounded his regatta off in third.

“Every race was a fight in the top three between myself and the two English girls.  We each had lots of firsts, seconds and thirds as we ended up sailing 14 races. Megan ran away with it in the last couple of heavy air days with Helena beating me for second in the last race”, said Bugg after the regatta.

Apart from the high calibre competition, the regatta at the 2012 Olympic and Paralympic sailing venue proved a good opportunity for Bugg to practice his strong wind racing skills and identify areas for improvement on the road to the 2016 Paralympic Games in Rio de Janeiro.

“I got a huge amount out of this regatta as I haven’t had much strong wind racing lately and I’ve definitely learnt that I have quite a bit of work to do in these conditions.  Although I’m really happy with my speed in the light to medium conditions. I was a bit disappointed to finish in third as I was in the running until the last race.  But I’m definitely happy with my progression over the Australian summer.”

“In my campaign for Rio we’ve been focusing a little more on my light air setup and sails and I think I’m in a really good place with two years to go.”

Butt is now heading back home to Hobart for a couple of weeks of recovery before returning to Europe for the 2.4mR European Championships in the Netherlands (30 June – 4 July 2014) and the IFDS World Championships in Halifax, Nova Scotia, Canada (16-24 August 2014) following next on the 2014 race schedule.

“I’ll sail in a brand new boat at the Europeans and the entries are looking fantastic so I’m really looking forward to it.  I will head back to Australia again for three weeks before going to Halifax for the IFDS Worlds and the first chance to qualify for the Paralympic games in Rio.”