All eyes on boccia after impressive results 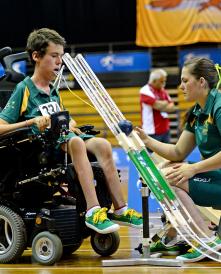 Australian boccia debutants Spencer Cotie and Ashleigh Jamieson have impressed coaches with their performances at the Hong Kong Open this weekend, notching up a number of wins in the pairs/teams competition to win a silver and bronze medal.

Fifteen-year-old Cotie joined teammate Daniel Michel to form an all Australian BC3 Pair who won two of their three games to claim the silver medal. Having failed to score a point against Hong Kong in game one of the tournament, the Australian duo orchestrated a mighty 11-1 defeat of Macau before finishing the Pairs competition with a 5-2 win over the Australian-Singaporean duo of Jamieson and Singapore’s Jurami.

The international pairing featuring Jamieson finished in third place behind the Australians, having enjoyed wins over Macau 6-1 and Hong Kong 3-2.

Meanwhile Australian BC4 athlete Jean-Paul La Fontaine enjoyed success with his partner Wong from Hong Kong, by winning all three games to finish with a silver medal.

The Australian Paralympic Committee renewed its investment in boccia in 2009 following the Beijing Paralympic Games with the goal to qualify a boccia team for the Rio 2016 Paralympic Games and achieve medal success at the Tokyo 2020 Games.

Since then, the APC supports four athletes through the PPP including Daniel Michel and Jason Mayweather, who will compete at the BISFED Boccia World Championships in Beijing later this year, and has recently announced a ‘Targeting Tokyo’ squad of 13 junior and emerging athletes.