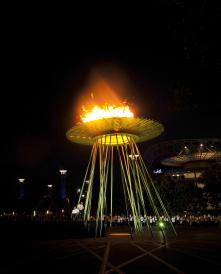 Marking 10 years since the APC established its national headquarters in the Park, Hellwig says the Sydney 2000 Paralympic Games raised the bar for future Games, and since then the precinct has proven itself a long term, world class, fully accessible venue for international Paralympic sporting events.

“When the APC moved in here 10 years ago in 2004, Paralympic sport was still very much finding its feet in Australia. We’d had the Games, which was a huge boost for the movement, but there was still a long way to go in both growing the sport, and keeping people engaged with the Paralympic movment and our Paralympians after Sydney,” said Hellwig.

“Sydney Olympic Park has played an enormous role in getting the movement to where it is today. We’ve hosted dozens of international Para-sport events here in everything from athletics to wheelchair rugby, wheelchair basketball, cycling, boccia and goalball.

“Many of our Paralympic athletes train here, including members of our wheelchair track and road team under the tutelage of the great Louise Sauvage and the Park also pays homage to some of our Paralympic greats such as Louise and our first indigenous Paralympian Kevin Coombs.”

Hellwig says since establishing itself at Sydney Olympic Park 10 years ago, the APC has grown monumentally and he is looking forward to where the Paralympic movement will be in another 10 years time.

“The facilities in the Park have helped many of our teams qualify for the Paralympic Games, found future Paralympians at talent search days, have exposed thousands of Australian school children to Paralympic sport and have hosted many international Paralympic athletes and guests.

CEO of Sydney Olympic Park Authority (SOPA), Alan Marsh, believes hosting the APC and Paralympic sport events in the Park has brought depth and diversity to the precinct.

Outside its Sydney Olympic Park headquarters, the APC also has offices in Canberra, Melbourne, Adelaide and Perth and uses its relationship with SOPA as a model for growing Paralympic sporting hubs across Australia.

“While we are also looking to grow our Paralympic sport hubs at the AIS in Canberra, and the Essendon Football Club’s new facilities in Melbourne, Sydney Olympic Park has cemented itself as the home of Paralympic sport in Australia and an ideal place for people with a disability to engage with sport,” said Hellwig.