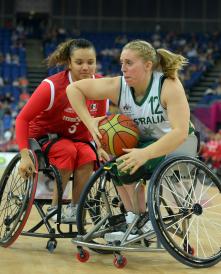 The final 12-player team will take on the world’s best in Canada, hoping to deliver the Gliders their first World Championship medal since capturing bronze in 2002.

Coming off an outstanding tour of Canada and the USA in March, Cobi Crispin and Amber Merritt will be eager to further enhance their growing reputations as two of the premier players in women’s wheelchair basketball.

Kyle included two players who will make their major tournament debuts in Canada, with the exciting duo of Stephanie van Leeuwin and Shelley Cronau earning the chance to help the Gliders end a 12-year World Championship medal drought.

Less than two months away from the World Championships tip-off in Toronto, Kyle believes he has a team capable of returning the Gilders to podium.

“I’m very happy with the squad selected – we have a good mix of high, mid and low pointers plus a good mix of youth and experience, with nine players returning from the London Paralympic campaign,” Kyle said.

“This is a very exciting time for the Gliders. The group has bonded behind our goal extremely well over the past 10 months and I feel this is the closest the group has been in years.

“The entire team is extremely excited with the opportunity to further prove themselves at the World Championships in Toronto.”
Kyle said the Gliders have high expectations and believes the determination and drive of the players will ensure the team will be one of the hardest to beat.

“London, whilst an excellent result, was disappointing to many of the players,” Kyle said.

“The team knows that if they play to their potential it will take a mighty effort for our opponents to beat us. This group is strong in their belief that a medal, and indeed the ultimate medal, is within their control.

“After our recent tour of Canada and the USA we now know that we have the group to get the job done.”

The Gliders have drawn a tough pool for the preliminary rounds of the World Championships, facing The Netherlands, USA, Mexico, Peru and France.

Action tips off for the Gliders in the early hours of Saturday morning 21 June when they face the USA on the opening day of competition, beginning a run of five games in five days.

Preparations for June’s World Championships will see the Gliders head to Europe, where they will spend time in Germany and The Netherlands prior to settling in Toronto.

The 2014 IWBF Women’s World Wheelchair Basketball Championships to be held in Toronto, Canada from 20-28 June.

For the latest information on the 2014 IWBF Women’s World Wheelchair Basketball Championships visit the official tournament website at http://2014wheelchairbasketball.com/.