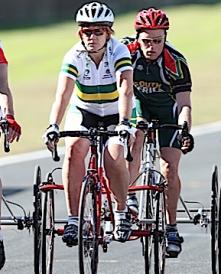 Australia’s best Para-cyclists will battle for national crowns this weekend at the 2014 Cycling Australia Road National Para-cycling Championships in Echuca.

To be held Saturday 10 and Sunday 11 May, national champions will be crowned in the road race and time trials across a number of classifications including those with vision or physical impairments.

The Championship also acts as the fourth and final round of the 2014 National Para-cycling Road Series, following events in Queensland, NSW and most recently Western Australia. And with minimal points separating the top athletes in the Series rankings across a number of categories, competition is set to be fierce in the final round.

The Para-cycling Championships will showcase Australia’s elite hand-cyclists, including several Victorians who had made their way to the top of the sport after being injured in a transport accident.

“These competitors such as Michael Taylor and Alex Welsh provide motivation to our injured clients who are themselves aspiring athletes. I wish all the Victorians well for the event,” said TAC CEO Janet Dore.