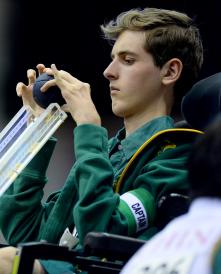 The dream of competing at the Rio 2016 Paralympic Games has drawn closer for Australia’s elite boccia athletes, after a successful tournament at the Defi Sportif World Boccia Open in Montreal, Canada.

The squad of six including Paralympic Preparation Program (PPP) members Jason Mayweather (BC2), Daniel Michel (BC3), Jean-Paul La Fontaine (BC4) and Tait Jenkins (BC3) notched up several wins to add to their individual world ranking points, which are crucial to qualification for the Rio Games.

La Fontaine and Jenkins were Australia’s best performing athletes, with both athletes making it through to the quarterfinal stages of the BC4 and BC3 competitions.

In his standout performance, La Fontaine, 42, defeated world number two player Marco Dispaltro of Canada in a tiebreak to make it into the quarterfinals. But fresh off the loss, Dispaltro was again placed against La Fontaine, with the eventual tournament winner defeating the Australian in a 9-0 whitewash.

Meanwhile, 17-year-old Tait Jenkins from the NSW North Coast also made it through to the quarterfinal stage but was beaten by Russia’s Vasiliev 4-2 to end his tournament.

Jenkins and La Fontaine, along with non-PPP competing athlete Scott Elsworth and junior athlete Will Marshall, did not qualify for the BISFED Boccia World Championships in China later this year, and will rely on building up their world ranking points for qualification to Rio. Jason Mayweather and Daniel Michel are the only Australians competing in China in September.

Since investing more funding into boccia following the Beijing 2008 Paralympic Games, the APC’s high performance goal for the developing sport is to send a boccia team to the Rio 2016 Paralympic Games and beyond.

“There have been some impressive wins by our team at this competition and it is great to see they are winning against top 10 ranked athletes in the world,” said Alison Campbell, APC Senior Manager, Performance.

“The chance to gain as many world ranking points as we can now is critical, with sanctioned competition opportunities for our squad in 2015 not yet known. For many of our athletes, the high performance sport environment is new, and their extensive training and preparation is paying off – we could see it with some of the wins our athletes had against the world’s best players.

Boccia is a precision sport for people with severe physical impairments. Competing in wheelchairs, athletes throw, kick or use a ramp to propel leather balls as close as possible to a small white ball which serves as a target.