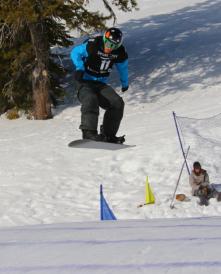 Messages of support and encouragement have been flowing in from around the world for injured Australian Para-snowboarder Matthew Robinson.

The 28-year-old was airlifted to the Parc Tauli Sabadell Hospital in Barcelona after he was involved in a serious race crash at the IPC World Cup finals in La Molina, Spain, on Wednesday.

Matthew underwent surgery on Thursday to treat his neck injuries. Currently in intensive care, he is now awake and responsive however his condition has not changed significantly in the past 24 hours.

His parents and fiancée are now on their way to Barcelona and will arrive at the hospital early Saturday morning (AEDST).

They will be met by members of the Australian Paralympic Team medical staff, as well as Dr David Hughes, Chief Medical Officer from the Australian Institute of Sport, who departed Canberra on Thursday to help coordinate the Australian medical response.

Australian Paralympic Committee Chief Executive Jason Hellwig said: “Our thoughts and best wishes are with Matthew, his family and his teammates as he continues to fight hard in hospital.

“We are doing everything we can to ensure Matthew and everyone around him receives the support they need.

“The Australian Paralympic Committee continues to work very closely with medical staff on the ground in Barcelona, as well as the Australian Embassy in Spain, the Department of Foreign Affairs and Trade and the AIS to ensure our response is well coordinated and leaves nothing to chance.”

Hellwig is leading an Incident Management Team (IMT) which was formed shortly after the accident. The role of the IMT, which includes five APC staff and two from the AIS, has been to effectively connect all the individuals and organisations involved in Matthew’s treatment and to provide a central channel for communication.

“We have received excellent support from our partners to this point, and we have also received a huge amount of well wishes from around Australia and overseas for Matt and his family.”

Matthew will continue to be closely monitored by hospital staff in coordination with Dr Hughes.

The APC is encouraging people to send their best wishes to Matthew via: www.facebook.com/AUSParalympics

The accident happened in the finish area during his first run in the competition.

The 28-year-old was treated and stabilised by the on-site doctors and rescue team, and was then airlifted to the Parc Tauli Sabadell Hospital in Barcelona.

Matthew has since undergone surgery to treat neck and spinal injuries, and he is currently in a critical condition.

A member of the Australian Paralympic Winter Team’s medical staff is at the hospital in Barcelona to help provide the best assistance possible, and the APC has been in contact with Matthew’s fiancée and family in Australia and has offered support.

The APC is also currently working with the Australian Embassy in Spain, the Department of Foreign Affairs and Trade in Australia, as well as the Australian Institute of Sport and International Paralympic Committee.

A more detailed statement will be issued in due course.

The 28-year-old resides in Melbourne. He has an arm impairment.

This year he has competed in three IPC World Cup events, and on Tuesday (11 February), he finished fourth in the first men’s upper limb impairment race in La Molina, Spain, as part of the IPC World Cup finals.

Para-snowboard will make its debut on the Paralympic program when the Sochi Games open on March 7, although Matthew’s classification will not be contested.