Rollers round out Europe tour on winning note 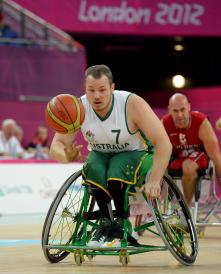 The Australian Rollers men’s national wheelchair basketball team have rounded out their tour of Europe with a rebound win over Italy after suffering their only blemish of the tour against Great Britain on Sunday.

Heading into the final two games of competition at the 2014 Easter Tournament Wheelchair Basketball in Belgium, the Rollers were met by a British team that would end their unbeaten run thanks to a 71-67 overtime defeat.

Great Britain burst out of the blocks to lead 17-11 at the end of the first quarter, sparking the Rollers into life – highlighted by a 16-8 third quarter to lead 41-38 heading into the final period. A high-scoring final quarter saw 39 points, with the game tied at the end of regulation thanks to a monster three-pointer from Shaun Norris close to the final buzzer.

Overtime ensued and the Rollers could not contain their opponents, eventually going down by four points.

Tristan Knowles was the best for the Rollers with 22 points, while Justin Eveson had 17 points, Brad Ness posted 13 points and Shaun Norris 11 points.

Australian Rollers Head Coach Ben Ettridge said the game against a fellow World Championship contender was a timely test for his players.

“We came up against a Great Britain team that are the current European champions and bronze medallists from the 2012 London Paralympics and they played like that team,” Ettridge said.

“I thought we were very slow in our decision making in this game and we lacked confidence, giving up too many mismatches and uncontested shots.”

The losing feeling didn’t last long around the Rollers camp as the team bounced back to defeat Italy 67-62, getting the advantage over the team they will face in their group at the 2014 IWBF World Championships later this year.

A rejuvenated Rollers team wasted no time taking control of the contest, leading 55-41 after three quarters before the Italians made a late surge to add respectability to the final margin.

It was again Knowles leading from the front for the Rollers with 21 points, finding support in the form of Shaun Norris, who had 18 points – his best performance of the tour.

Ettridge said the victory was a fitting way for his team to finish the tour, particularly given the hectic schedule that saw them play nine games in less than 14 days.

“It is a credit to the team and the support staff to bounce back to finish the tour on a winning note,” Ettridge said.

“Italy are a team of crafty veterans who really came at us in the final quarter, but we weathered the storm well and then executed down the stretch a lot better.

“I’m really proud of the group and the effort they have put in on this tour.”