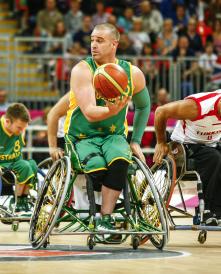 The Australian Rollers men’s national wheelchair basketball team, continue to conquer all before them, claiming back-to-back wins to start the 2014 Easter Tournament Wheelchair Basketball in Belgium.

Full of confidence after an undefeated tour of The Netherlands, the Rollers headed to Blankenberge in Belgium for a five-nation tournament against Great Britain, The Netherlands, Canada and Italy.

The winning feeling would continue, with the Rollers opening the tournament with a comprehensive 75-50 win over Paralympic gold medallists Canada, before a hard fought 67-63 victory over The Netherlands – the fourth consecutive win for the Rollers over the Dutch team.

Coming off a pre-tournament win over Great Britain on Thursday, the Rollers wasted no time making light work of the Canadian team, outscoring their opponents 20-11 in the second quarter to hold an 11-point half time lead.

This dominance continued after the main break as the Rollers showed their defensive qualities, restricting the Canadians to just seven points in the third quarter – eventually running out 25-point winners.

Australian Rollers Head Coach Ben Ettridge praised his troops for their performance against a high-calibre opposition, particularly their defensive efforts.

“I was really pleased with our balanced attack – to get three guys in double figures and two more with eight points a piece was a great return against quality opposition,” Ettridge said.

“I felt our tenacity on the defensive end of the floor is getting to where we want it to be. To only give up only 18 points in the second and third quarters showed that the boys are digging in.”

It was a tough scenario on Sunday as the Rollers faced The Netherlands for the fourth time on the tour, with the Dutch team pushing the tourists all the way.

A tough contest from the first tip to the final buzzer, the Dutch team made life difficult for the Rollers, matching them on the offensive and defensive ends of the floor. A five-point Rollers half time lead was reduced to two points heading into the final quarter, but the reigning IWBF World Champions managed to hold on for a tough four-point victory.

Ettridge said the game was a reminder to his players that they must be switched on against all opposition.

“This was the closest game of the tour and it was a real credit to them and how they came ready to play,” Ettridge said.

“Our guys lacked a little defensive commitment early and we were tentative in offence and it showed. We lacked aggression at both ends.”

Next up for the Rollers is a clash with Great Britain followed by Italy to round out the tour.