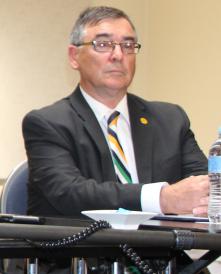 The Campaign Rio team has echoed the sentiments delivered by the Governor-General, His Excellency General the Honourable Sir Peter Cosgrove AK MC (Retd) in an address to Olympic and Paralympic coaches and performance leaders in Sydney today.

The Governor-General addressed the Campaign Rio Forum about the contribution of Australia’s Olympic and Paralympic teams to the nation’s sporting reputation and identity, as well as principles of leadership including vision, ethos, integrity and communication.

“On behalf of all Australians, thank you; for your hard work and your contribution to Australia’s world-renowned sporting reputation, so closely linked to our national identity.

“I know you are the most knowledgeable and experienced and aptly-placed people for the challenging job ahead. Your understanding, your expertise, your talent, and your motivation all combine to make you a collective force to be reckoned with.

“You are the glue that will bind the Campaign Rio athletes together, hopeful and focussed as they work towards their goals. I look forward to seeing the results of Campaign Rio in action in 2016.”

“It was inspiring to hear the Governor-General speak about Campaign Rio, the collaboration between the AIS, AOC and APC which ensures Australia’s Olympic and Paralympic teams are the best planned, best prepared and best performed at Rio in 2016,” Wylie said.

The overall aim of the Campaign Rio collaboration and its forums is to give athletes the best chance to meet Australia’s Winning Edge targets, including Australia being a top-five nation in Olympics and Paralympics.

“The Rio Games are providing their own unique challenges to the Australian teams, but with adequate planning and preparation, through knowledge gathering and a positive outlook, these testing situations can actually work in Australia’s favour in Rio,” he said.

IOC Vice-President and AOC President John Coates AC said principles of leadership were also relevant as Brazil faces its own challenges in being ready for the Rio Games in 2016.

“Rio faces an enormous challenge to be ready in time to welcome the athletes of the world in 2016,” Coates said.

“The IOC has formed a special task force to try and speed up preparations but the situation is critical on the ground. Our team on the other hand will be best prepared and the signs of a surge on the medal tally are very positive.”

APC President Glenn Tasker said the Rio 2016 Games would produce challenges for all competitors, particularly for athletes with a disability.

“The Rio Games won’t be easy – the city’s geography, the language barrier, and the long haul flight are some of the many challenges ahead, particularly for athletes with a disability,” Tasker said.

“These complexities will be a true test of our planning, our processes and our mettle, which is why the work being done for Campaign Rio is so important.”

A transcript of the Governor-General’s address will be available at www.gg.gov.au after 2:00pm AEST.