Fox on fire for Glasgow 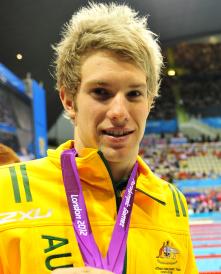 Brisbane’s Daniel Fox has beaten world record time to earn his place on the Commonwealth Games swim team in front of a home crowd at Brisbane’s Aquatic Centre last night.

The 22-year-old won the S14 Para-sport 200m freestyle in 1:57.68 to qualify for selection, with 18-year-old Mitchell Kilduff (2:00.60) and Joshua Alford (2:02.72) finishing with personal best times in second and third respectively. All three boys have qualified for 2014 Commonwealth Games selection.

In the women’s multi-class 50m backstroke, defending champion Taylor Corry kicked off the race with a strong start but it was local Queenslander Lakeisha Patterson who claimed the gold medal in the end clocking 39.30 seconds.  Corry came in second taking home the silver in 32.26 seconds and Maddison Elliott touched the wall in 37.51 seconds towin the bronze.

It was a race against the clock in the men’s multi-class 50m backstroke final as the number one qualifier from the heats, Timothy Disken went out hard hoping to claim the national title from the reigning champion Michael Anderson. Disken held his stroke to claim the gold medal in 30.68 seconds ahead of Anderson (29.10) and Sean Russo (28.85).

And rounding out the multi-class races for the night, Queenslanders Brenden Hall and Rowan Crothers went head-to-head in the men’s multi-class 400m freestyle final. The two spent the eight laps chasing each other to the finish and with under a second dividing them it was Hall who won the gold taking eight seconds off his qualifying time in 4:11.24. Crothers took the silver touching the wall in 4:12.31 and Joshua Alford backed it up for the evening, clocking 4:20.08 to claim the bronze.

In tonight’s racing, Katherine Downie will try for a Commonwealth Games spot in the S8 100m breaststroke up against Maddison Elliott, Taylor Corry, Jacqueline Freney and Kayla Clarke will race for the multi-class 100m backstroke women’s national title while Michael Anderson, Matt Haanappel and Jeremy Tidy will try for the men’s title. Racing will continue with the men’s and women’s multi-class 200m freestyle.