Fearnley and Colman to square off for Glasgow 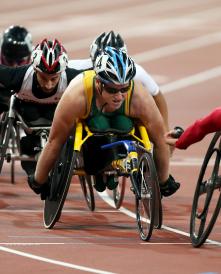 The gold and silver medallists from Delhi 2010, the duo have both achieved the A-Standard coming into competition and can be discretionarily nominated for selection if strong performances ensue in the final in the coming days.

Fearnley, who became a father to son Harry only last week, is arguably Australia’s most recognisable Australian Para-athlete, with his international resume including 10 Paralympic medals, including three gold, and five medals from the IPC Athletics World Championships. He won the London Marathon in 2013, and clocked 3:02.61 in Canberra (ACT) in January to stake his claim for nomination.

“I’ve been ticking all the boxes and am looking forward to getting out there and racing this weekend. It has been a hard summer of training with a real focus on my long distance training. I went to Falls Creek over the New Year to do a solid block of work and I feel that I am now starting to reap the benefits of what I have done to now and I’m confident that I can see that continue,” Colman said.

“We need to remember that we are in Melbourne for the Nationals and the weekend’s weather could be anything. That said it is going to be a good hit out for Kurt and myself, and probably one that we could see again in the final in Glasgow.

“I’d love to win the gold medal at the Commonwealth Games. It would just be amazing. To do that though I am going to have to beat Kurt and that will be no easy feat, not to mention the fact that we will see David Weir in Glasgow as well, and we all remember how he virtually clean-sweeped the wheelchair medals at his home Paralympic Games in 2012.”

The Commonwealth Games B-Qualified Richard Nicholson (ACT) will join Colman and Fearnley on the start line.

In the women’s wheelchair 1500m it will be a race between London 2012 Paralympians Angela Ballard (NSW), Madison de Rozario (WA) and Christie Dawes (NSW). All three have Commonwealth Games A-Qualifying times for the metric mile, and all can be discretionarily nominated for selection if they perform strongly in the coming days.

Looking to rain on their parade is Jemima Moore (Vic), who has this season improved her personal best to 3:56.19 to stake her claim for nomination for selection to the Australian team for Glasgow 2014.

Tickets to the Australian Athletics Championships are not pre-sold. All tickets will be sold ‘on the gate’ at Lakeside Stadium on each of the four days of competition.

The final timetable and entry lists for the 92nd Australian Athletics Championships, the last event on the 2014 National Athletics Series, are available for download by clicking here.