Elkington and Raison impress for Glasgow 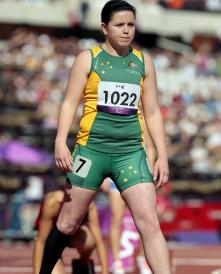 Para-athletes Jodi Elkington and Paul Raison have been the first to qualify for selection to the Australian Commonwealth Games athletics team, after impressive performances on day one of the Australian Athletics Championships in Melbourne.

Elkington’s best jump of 4.19m for her F37 long jump was enough to win overall ambulant gold and ensure her nomination to the Australian Commonwealth Games Association to compete in the F37/38 Para-athletics long jump in Glasgow.

The performance delivers a fourth appearance on the world stage, after she debuted at the Commonwealth Games four years ago in Delhi, then competed at the IPC Athletics World Championships in Christchurch in 2011 and the London Paralympic Games in 2012.

“I’m so chuffed to be the first person nominated. It’s a bit of an honour on top of an already great achievement. I’m stoked, but it is a bit of a relief if I am going to be honest because in my opinion of my performance I think I have a bit to work on still,” Elkington said.

“Looking at the field before competing today I was quietly confident that I could beat many of the girls out there. You have to do it on the day though and I am glad that I did. It’s a good confidence boost ahead of Glasgow.

“Plenty to work on though, I have to probably move my run up a little bit and make sure that I keep my head up approaching the board. It’s all things that I know I have been doing wrong but I wanted to win here and then focus on the technical side of things to make sure it is right to go come Commonwealth Games.”

The winner of the silver medal in the men’s Para-athletics ambulant discus throw behind IPC Athletics World Championships medallist Guy Henly (NSW), Paul Raison’s best mark of 44.45m is well beyond the required A-Standard for the F42/44 discus at the Commonwealth Games and more than enough to ensure his nomination for selection.

Raison won a silver medal in the shot put at the Beijing 2008 Paralympic Games, as well as a bronze medal in the men’s 4x100m relay and will be hoping to mark his return to international competition with a medal in Glasgow.

In other highlights, Deon Kenzie (TAS), who competed for the Australian Flame at the IPC Athletics World Championships and has cerebral palsy, won the men’s ambulant 800m for Para-athletes in a time of 2:07.90 from Paul Gilbert (WA, second) and Jaryd Clifford (VIC, third).

Tickets to the 92nd Australian Athletics Championships and Commonwealth Games Selection Trials are not pre-sold. All tickets will be sold ‘on the gate’ at Lakeside Stadium on each of the four days of competition.

The final timetable and entry lists for the 92nd Australian Athletics Championships, the last event on the 2014 National Athletics Series, are available for download by clicking here.