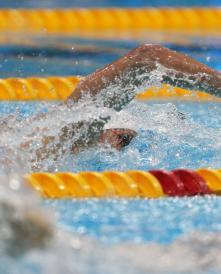 The 16-year-old, who made his international debut at last year’s IPC Swimming World Championships, defeated Australia’s most prolific Paralympian in his pet event and wiped 0.26 seconds off Cowdrey’s world record to claim the gold medal at the Australian Swimming Championships at the Brisbane Aquatic Centre.

Cowdrey followed in second place, hitting the wall in 56.45 while 400m specialist Brenden Hall came in third with a time of 56.90 to also qualify for Australia’s Commonwealth Games Team.

Crothers won a bronze medal in the same event at last year’s World Championships, behind Cowdrey who won gold. Now the stage will be set for a great race in Glasgow 2014, with Cowdrey hoping to retain his 100m freestyle crown at this third successive Commonwealth Games.

Fifteen-year-old Maddison Elliott also rewrote the record books last night in the S8 50m freestyle, touching the wall in 30.13 and eclipsing her own record by 0.15 seconds. Elliott, who at 13, was Australia’s youngest ever Paralympian, won the gold, followed by Queensland’s Lakeisha Patterson in second (32.27) and Taylor Corry in third (28.45).

Local Brisbane swimmer Daniel Fox had the crowd cheering as he finished strong in the men’s 50m freestyle multi-class final hitting the wall in a quick 24.77 seconds to claim the gold medal. Eighteen-year-old Mitchell Kilduff finished in second place with a time of 25.17 and Andrew Pasterfield in third place touching the wall in 24.04 seconds.

Members of the London Paralympic team were on show in the men’s 100m breaststroke multi-class final with team mates Blake Cochrane taking the gold medal in 1:18.94, Ahmed Kelly claiming the silver and Richard Eliason taking home the bronze in 1:10.08.

Meanwhile, the women showed strong form in the 100m breaststroke multi-class final, in the end Tanya Huebner took the gold medal with a time of 1:41.86, Kayla Clarke the silver medal hitting the touch pad in 1:23.09 and at just 15-years-old Hayley Morris finished in 1:24.21 taking the bronze.

Racing continues today with the women’s S9 100m freestyle Commonwealth Games qualifying race as well as the multi-class individual medley for both men and women.

There will be six Para-swimming events held at this year’s Commonwealth Games, as well as events in athletics, cycling, powerlifting and table tennis.