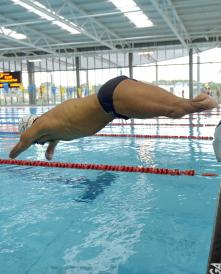 Australia will send its largest ever squad of Para-swimmers to the Glasgow 2014 Commonwealth Games, with 12 Para-swimmers included on the 59-strong Australian Swimming Team.

The Australian Championships were also a selection trial for the upcoming Para Pan Pacs due to take place in California in August.

Swimming Australia announced a 29-strong team to take on Canada, Japan and the USA over five days of competition, with the meet an important part of the preparation and planning towards Rio in 2016.

Swimming Australia President John Bertrand said the Para Pan Pacs team will be looking to continue their outstanding run of success over the last couple of years.

“Our Paralympic swimmers were fantastic in London in 2012 and backed it up again in Montreal last year,” said Bertrand.

“Taking on the USA on their home soil will be tough, but what we’ve seen from these athletes this week suggests they are well on their way to continuing their good run of form on the international stage and preparing for Rio.”

Please see below for full squad lists for both events.