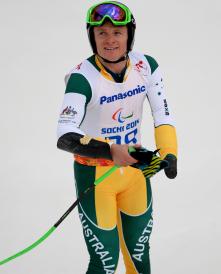 More spills came on the Sochi mountains today in the men’s Super-G but few thrills for the Australians as both Toby Kane (VIC) and Mitchell Gourley (VIC) did not finish the course.

Day Two of the Winter Paralympic Games dawned with a warm 6 Degrees (Celsius) at the top of the Rosa Khutor Alpine Centre, rising to 13 degrees by mid-competition in three men’s classes – vision-impaired, standing and sitting.

Kane (leg amputee) and Gourley (arm amputee) were among 12 of the 31 athletes in the standing class that didn’t make it down the 1,460 metre course. Kane fell more than a third of the way through and Gourley missed a gate when unable to control his skis on a wide turn.

“The course set up this morning was difficult – real turny again across the flat and the snow is not quite at the level to have those turns,’’ Kane said. “It’s harder to press on the ski and really bring it around,’’ he added, after finishing sixth in the Saturady’s Downhill.

“In saying that I thought it was going OK (before fall) but that’s a part of able-bodied ski racing, of Paralympic ski racing, and definitely a part of one-legged ski  racing.

“It’s not through lack of skill or lack of trying. It’s just that if you are one degree off of where you need to be, you’re on your arse.’’

“I’m gutted. It’s a tough day for everyone and it didn’t quite come off for me,’’ he said after the frustration of completing  two-thirds of the course before the gate mishap.

“I just didn’t quite get my direction right off the lake jump and flew a bit further than I thought with the speed that I had and landed outside the line. It’s pretty bumpy out there so I was lucky to keep on my feet I think.

“I saw (Russia’s Alexey) Bugaev do something similar and I’m a bit gutted because he managed to save it and he is in third place. That hurts, but at that same time, that’s ski racing.’’

But a lot of talk at the bottom of the Rosa Khutor course was the conditons. There were five DNFs in the vision-impaired class while 14 of 31 competitors in the sit-ski class failed to post a time.

Despite all the tumbles, many of which can be attributed to the soft, slushy snow, Australia’s head alpine coach Steve Graham said the course was still safe.

“It’s not dangerous,’’ Graham said. “It’s just that you are right on the egde the whole time. It takes one little mistake and you’re out, even for some of the best guys.”

“Bugaev who came third nearly ate it today. But he’s lucky he’s a 17 year-old and really athletic so that he can overcome something like that.

“You’re at the Paralympic Games and it’s all about medals. Everyone sees themselves as a contender and not everyone is,’’ Graham said.

Kane added:  “The conditions aren’t too bad. They’re doing a very good job in terms of preparing the course.

“It’s not ideal and not what we would really hope for at the event. But it’s really warm so they’re doing all they can to get it at this level,’’ Kane said, adding he had not heard a lot of the international athletes complaining.

“There was some big crashes yesterday and that’s a product of skiers just going really hard, especially in the sit-skiing where they always push the limits.’’

Gourley also did not believe the course was too dangerous.

“Not today. I don’t think so.  It is tough when you get off the (racing) line and there are some piles of snow, but they have got as many people on the hill as they can doing as much as they can,’’ Gourley said.

The Australian team now looks forward to the women’s Super-G on Monday, where Melissa Perrine (NSW) and guide Andrew Bor hope to make amends for a disappointing fourth in the Downhill on Saturday. Kane and Gourley are back on Tuesday in the Super Combined (Super-G run in the morning and slalom in the afternoon).

“Toby knows he’s skiing well. Mel knows she and Andy are in with a medal chance every time they run,’’ Graham said.

“So really, it’s just up to the guide to put her in the right spot and that’s the crucial thing.

“It’s ski racing. We’ve just got to make sure we take the positives out of today and head into tomorrow. The positives are still there.

Gourley is looking ahead even further than Super Combined to the technical events later in the week.

“I feel fine. We have a day off now which is well timed and well needed. It’s been a physical week with all the bumps and things.

“Physically, I’m feeling good and in a really good position. Technically, I’ve been skiing some of the best GS (giant slalom) in my life over the past couple of weeks so I couldn’t be happier.’’