Rahles-Rahbula ruled out of Sochi 2014 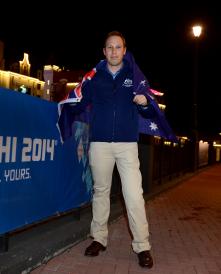 Australian flag bearer Cameron Rahles-Rahbula will not be able to compete at his fourth and final Winter Paralympic Games.

The heartbreaking decision to withdraw from all alpine skiing events in Sochi was made after Rahles-Rahbula consulted Australian team doctor Geoff Thompson, and then spoke to Chef de Mission Chris Nunn and head alpine coach Steve Graham.

Further scans and tests have shown Rahles-Rahbula’s knee and ankle cannot heal in time for him to compete in the technical events – giant slalom and slalom – starting later this week (Thurs-Sat).

The 30-year-old from Geelong had already ruled himself out of the three speed events at the Sochi Paralympics – downhill, super-G and super combined.

“We’re incredibly disappointed for him as an athlete, but yet incredibly proud of the integrity he’s shown as he’s dealt with all this,’’ Nunn said.

Rahles-Rahbula, a left leg amputee, fell heavily in downhill training on Wednesday. He had to be evacuated off the snow by medics towing a sled. Initial X-rays, MRIs and scans showed he chipped his tibia (shin bone) up near his right knee. He also suffered extensive bruising to his right ankle, plus grazes to his right cheek, a black eye and bloodied nose.

The two-time Vancouver bronze medallist had been undergoing extensive ice treatment and physio daily on his injuries. But there is not enough time to get his right leg – his skiing leg – back to racing standard.

“I’ve seen the doctor and unfortunately I’ve been ruled out for the remainder of the Games,’’ Rahles-Rahbula said. “It’s just the high risk to the knee.  With the damage to the knee already, if I do race there’s the potential to make it much worse.

“Aside from that it’s still quite sore so there’s also the risk of injuring something else if you’re not skiing the right way.

“So that’s the end of my Games from an athlete point of view.’’

Rahles-Rahbula carried the flag for Australia at Friday night’s Opening Ceremony. He had to use a set of crutches to lead out his team-mates in a bid to try to keep the weight off his injured right leg.

“We know there’s a small fracture in the knee and we also know that there’s some damage underneath the bone, where it’s bruised. We just don’t know the extent of the cartilage damage,’’ said Rahles-Rahbula, who himself is a qualified sports physiotherapist.

“Ski racing has its high risks and this is something that happened. The conditions have been quite challenging… being March and quite warm weather meant the conditions outside the course were quite bumpy.

“It was one of those accidents that freakishly occur. And that’s probably the most disappointing part of it – that it wasn’t something you expect to happen. It was a very unusual accident.’’

Although bitterly disappointed he cannot compete in Sochi, Rahles-Rahbula said that if his last act as an athlete was to carry his nation’s flag, then that made him happy.

Nunn said the flag bearer’s work was not done yet.

“Cam has all the qualities of a great leader. And he’s done that by being such a hard-working and talented ski racer,’’ Nunn said. “The rest of the team here in Russia – and we have four first-timers at a Paralympic Games – are learning an awful lot off Cam. He is an excellent role model.’’

Rahles-Rahbula, whose wife Emily and two-year-old son Archie came to Sochi to watch him race, said he would still live in the Athletes Village so he could be around his team-mates.

“I’m going to encourage the group as they each have a big role to play over this week. Our goals haven’t changed so if I can help in any way I’ll be there.’’