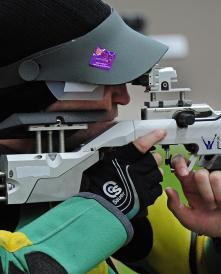 Maroney went into the second round of the weekend’s competition with the highest score of 629.8, and maintained his dominance by finishing on 210.1, to take the gold medal. Ukraine’s Vasul Kovalchuk followed closely behind him, to clinch the silver from Great Britain’s Richard Davies.

Maroney has displayed strong form in a series of competitions leading into this year’s world cup season. He won the Air Rifle Standing and Prone titles at the 2013 Oceania Championship, followed by outstanding shooting at the International Grand Prix (GP) in Sydney earlier this month. Maroney shot an Australian Record at the GP and then went on to break it again the following day.

His excellent form at the Australia Cup in Adelaide last fortnight further cemented a successful campaign, with an unofficial world record set in the Air Rifle prone event.

“Jason shot two top scores in both his events at this World Cup, winning gold in Air Standing and finishing fourth in Air Prone. This is an excellent performance for the start of the year,” Sipek said.