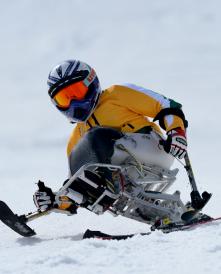 One item you don’t usually find among a woman’s luggage on an overseas trip is a tool kit…. wrench, flat-head screwdriver, pliers.

The 23-year-old is the first female sit-skier to compete at a Winter Paralympics.

“I carry a few tools that you need to tighten screws here and there and adjust the shock (absorber),’’ she said. “My tool kit is the first thing that goes into my bag.’’

The Winter Games have seen some talented sit-skiers wearing the green and gold over the years, including Albertville and Lillehammer bronze medallist David Munk; two-time gold medallist in Lillehammer Michael Norton;  two-time Paralympian in Torino and Vancouver and 2009 world Super-G champion Shannon Dallas; and Nagano athlete Anthony Bonaccurso, who switched to tennis and won a bronze at the 2004 Athens Summer Paralympics.

But they were all men, who had that real bravado to want to ski down a slope at speeds of around 120kph, strapped into a seat or “bucket’’, that is attached to a large spring like a motorcycle shock absorber, that slots onto a mono-ski .

And then Pendergast comes along with her blonde shoulder-length hair, earrings and brimming smile.

“I guess it’s the real speed you can get,’’ she said, when asked what the `X’ factor was in sit-skiing.

“It’s the sense that you’re in control and yet you’re out of control. The feeling in the sit-ski is like a rodeo ride sometimes coming down the hill.’’

So here she is at the 2014 Sochi Paralympics breaking down a sporting barrier.

“It’s very exciting and it’s flattering at the same time just being the `first’ at something. I’m enjoying the experience at the moment, but I’m even more excited to get out there and compete in my first Games,’’ she said.

Leg amputee Emily Jansen became Australia’s first female Winter Paralympian, when she competed at the 2006 Torino Games, and Jess Gallagher has two milestones to be proud of. She is the first Australian female Winter athlete to medal with her bronze in slalom at the 2010 Vancouver Games. She is also the first Australian female selected for both a Summer and Winter Games (athletics at London 2012).

But five years after graduating high school, Pendergast feels the sense of occasion as well.

“My high school – Loretta Normanhurst – sent me a message. They got the whole school in the courtyard to send me a `good luck’ message on video. The principal even sent a message,’’ she said.

“It really moved me just to know my whole school was behind me.

“Then getting the uniform, wearing it, seeing the coat of arms on your chest and the word `Australia’ across your back really hits home that I’m actually here and I’m representing my country. You want to do them proud.’’

She has always admired USA Paralympians and sit-skiers, Alana Nichols and Laurie Stephens. The pair took silver and bronze, respectively, in the women’s Downhill in Sochi.

Pendergast did not qualify for the Downhill but finished 8th in Slalom on Thursday and will contest the Giant Slalom on Saturday.

“I really admire how much they’ve improved with the experience they’ve gained,’’ she said of Nichols and Stephens.

“I’m happy to listen to any advice they have. It is a bit intimidating coming into the world of sit-skiing, when you don’t really know anyone and you haven’t got those years of racing experience behind you.

“I look at Laurie and Alana and it wasn’t until their second or third Games that they really started to perform,’’ Pendergast said hoping Sochi won’t be her only Paralympic competition.

“Sit-skiing is something where it is just experience in getting your rig right for you.’’

But first, there’s tinkering with the sit-ski.

“Your sit-ski is your piece of technology that you have to maintain. It’s quite complicated and I wasn’t a gadgety type of person when I first started sit-skiing,’’ Pendergast said.

The last thing she worries about is hurting herself, even though Pendergast needs crutches for mobility as she was born with sacral agenesis.

“It’s (injury) always in the back of your mind sometimes when you’re heading down the hill and you’re taking certain risks. But at the same time you’re focusing on trying to go fast and trying to perform.

“So in the front of your mind is that spirit of wanting to compete and get the best time.’’