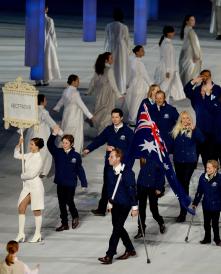 Russian ballerinas, ice fishermen, dancing Cossacks and a 50-metre Icebreaker ship `gliding’ across the stage at the Sochi Paralympic Opening Ceremony has set the tone for a spectacular Games.

It was four-time Winter Paralympian Cameron Rahles-Rahbula, who took two bronze medals in Vancouver in 2010, emerging from the tunnel to lead out the world.

In one way it’s highly appropriate that Rahles-Rahbula was the first flag bearer – and athlete – to enter the arena.

He must be one of the bravest athletes in Sochi already and competition hasn’t even started.

Rahles-Rahbula, who lost his left leg to cancer as a teenager, normally doesn’t need crutches to get around. He wears a lower-limb prosthetic.

But such was the damage to his right leg in a high-speed crash on the Rosa Khutor Downhill course on Wednesday, that he needed the extra support for his good leg for last night’s Ceremony. The 30-year-old chipped the top of his shin bone and badly bruised his right ankle. He was still sporting a swollen left cheekbone and black eye from where his face hit the snow hard.

But he proudly carried the flag as he emerged from a ramp that opened up in the middle of the stage to lead out the Australian team of nine athletes, two sighted-guides, coaches and officials.

A total of 550 athletes from 45 countries will compete in the 10-day Games, and that includes Ukraine. Russia’s neighbour  averted a boycott of the Games over the presence of Russian troops in Crimea after a meeting between Putin and Ukrainian Paralympic Committee president Valeriy Suskevich on the eve of the Opening Ceremony.

Australia is competing only in Alpine – ski racing and snowboard cross.

The first three Australians on the slopes of Sochi are Downhill skiers Tony Kane (leg amputee) and Mitch Gourley (arm amputee) in the standing class, and Melissa Perrine with guide Andrew Bor, in the vision-impaired class.

All three athletes did not march last night so they would be fully rested for day one of competition.