Kane bows out of Paralympics with Prestigious IPC Award 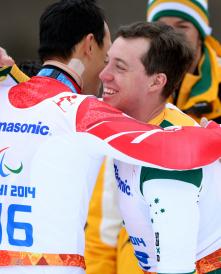 For the first time ever, an Australian will win the prestigious International Paralympic Committee (IPC) award for excellence by an athlete both professionally and personally at a Summer or Winter Games.

Known as the Whang Youn Dai Achievement Award, it has been presented at the past 11 Paralympic Games stretching back to Seoul in 1988.

But alpine skier Toby Kane is the first Australian to receive it. The award is presented to athletes who best exemplify the Paralympic spirit and inspire and excite the world during the Games.

“I’m very proud to have gone to three Paralympic Games, I’m a very proud Paralympian and I really believe in sport for people with a disability in terms of what it can show the world.

“Just to hear Dr Whang’s story and to hear what she has overcome throughout her life really exemplifies the Paralympic spirit away from sport. It’s all about people striving to push through disability to show their ability.”

The IPC announced six nominees had made the short list in Sochi for the award: two Russians, two Canadians, a Dutch snowboarder and Kane.

Two athletes – one male, one female – will receive their Whang Youn Dai Achievement Awards in front of 40,000 people and a global audience of millions at tomorrow  night’s Closing Ceremony at Fisht Stadium.

The female recipient winner of the award is snowboarder Bibian Mentel-Spee from the Netherlands.

The award is named after Dr Whang Youn Dai, who after being stricken with polio at the age of three, became the first female physician with a disability in Korea in 1963. Dr Whang has dedicated her life to the development of the Paralympic sports around the world for more than 50 years.

An IPC statement announcing Kane and Mentel-Spee (the first gold medallist in snowboard) as the two winners for the 2014 Games said Kane had play a key leadership role within the Australian team over a long period, but particularly after snowboarding teammate Matthew Robinson tragically died following an accident at a competition in Spain last month.

Kane, a left leg amputee who competes in the standing class for alpine events, faced an incredibly strong field of athletes to win Bronze in the men’s Super-Combined. He was the only single-ski athlete to stand on the medal podium across five events in Sochi. Other single leg amputees used two skis – their prosthetic legs fitted into their bindings.

The 27-year-old from Melbourne is also training to become a doctor as a result of his experiences with healthcare professionals throughout his life. He lost his lower right leg at the age of two following a car accident.

“He’s an outstanding person, not just an outstanding athlete,’’ said Australian Paralympic Committee CEO Jason Hellwig. “When you think of the words that define the Paralympic movement – courage, determination – there’s no athlete that embodies them better than Toby.

“It is really significant and it’s great the Paralympic movement has this award. Everyone comes here to compete really hard because elite sport is what it’s all about,’’ Hellwig said.

“But this public and prominent reminder about the value of sporting behaviour and the ethic of sport is very unique in world sport these days. I’m very proud that the Paralympic movement recognises that.

“And we at the APC are exceptionally proud Toby is the first Australian to win it,’’ Hellwig said, noting the contribution Kane had made after Robinson’s death.

“For this particular campaign he became the leader in a really difficult month for the whole team. He was the guy we all looked toward to bring everyone together.

“After Matt passed away we needed someone within the athlete group with the leadership ability and the character to help get everyone through it – not just cope with it but remain focused on performance.’’

The Australian team of nine athletes entered for alpine skiing and snowboarding, actually had only seven athletes compete in Sochi. Cameron Rahles-Rahbula (Vic) and Joany Badenhorst (NSW) were seriously injured before competition.

Highlights of the Closing Ceremony, including the presentation of the Whang Youn Dai Achievement Award, will be shown on ABC1 and ABC Grandstand.