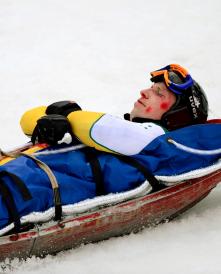 The Australian team flag bearer, Cameron Rahles-Rahbula, has suffered serious injuries in a fall during training on the slopes of the Rosa Khutor Alpine Resort.

Extensive tests and scans have found the 30-year-old from Geelong damaged his right knee, right ankle, and has bruising to his cheekbone and jaw.

Australian Team doctor Geoff Thompson said there was a small fracture to the top of his shin bone (tibia), but that the Victorian would make a full recovery.

“The fracture is at the top, on the inside of his shin bone just near the kneecap tendon,’’ Thompson said. “The fracture will heal – it’s just a matter of time and careful management.

“There’s no other damage inside the knee that’s obvious at this stage. The ligaments are intact and normal.’’

Rahles-Rahbula also has bruising to his right ankle but no facial fractures.

The two issues now are his participation in Friday night’s Opening Ceremony at the Fisht Paralympic Stadium, and then the five Alpine events he had entered on the Sochi Winter Paralympic program – Downhill, Super-G, Super Combined, Slalom, and Giant Slalom.

“I’m going to try to do everything in my power to be there,’’ Rahles-Rahbula said of carrying the Australian flag. “We’re going to try to come up with a plan to enable me to walk along. At the moment I’m getting along on crutches and a prosthetic leg.’’

Rahles-Rahbula’s injuries are to his good leg. He lost his left leg to bone cancer as a teenager.

But he is the most experienced of the nine athletes in the Australian team in Sochi having competed at the 2002 Salt Lake City, 2006 Torino and 2010 Vancouver Games. Sochi was his fourth and final campaign.

However, Rahles-Rahbula has ruled himself out of the Downhill, which kicks off the Paralympic competition on Saturday. It is also highly unlikely he can compete in the two other `speed events’, the Super-G and Super Combined.

“The Downhill is definitely out of the question at the moment, because I’m not weight-bearing yet (on right leg). We’ll see how it feels in a week and then see what’s going on,’’ Rahles-Rahbula said.

“ But in saying that we’ve got to take into account the long term effects on the knee, particularly being an amputee, that’s always something I’ve got to be aware of as well.’’

Rahles-Rahbula and team-mates Toby Kane and Mitch Gourley in the men’s standing class, and Melissa Perrine in the women’s vision-impaired class, all took part in practise runs on the Downhill course today. Athletes raced against the clock to simulate race conditions.

Kane also fell during training but was uninjured. There were 14 competitors from the six races (three men’s classes; three women’s) that did not make it down the mountain.

Perrine was the fastest over the course, ahead of Danelle Umstead (USA) and Jade Etherington (Great Britain).

Rahles-Rahbula said he remembered his crash quite vividly, despite bumping his head and being taken off the mountain in a rescue sled.

“It was just a challenging turn and it (ski) just lost the edge and was slipping, which is pretty normal in ski racing,’’ he said, recalling the moments before he fell.

“Unfortunately, with the way the snow is – quite clumpy and heavy – off the side of the track, where I slipped into, my leg just stopped and I managed to twist myself.

“The ankle is quite sore but structurally it’s quite sound. The knee doesn’t feel too bad but I have a fracture in the front part of the knee (tibia bone) and maybe some other damage which we’re not quite sure. We’ll see how it feels over the next few days.

“The actual fracture is not in a critical part of the knee so it doesn’t rule me out entirely.’’

Head coach of the Australian Paralympic alpine team, Steve Graham,  said Rahles-Rahbula’s injuries had jolted the team but everyone remained focused on the Games.

“It’s disappointing. Cam was named the flag bearer yesterday so he’s kind of the appointed leader of the team here,’’ Graham said.

“So for that to happen on the first downhill training day, is very disappointing for him and the team. But that’s the nature of skiing.

“He hasn’t had a bad injury for most of his career and it happens right at the end. So I’m sure it’s really frustrating for us and really unfortunate for us.’’

On Rahles-Rahbula’s prospects of being able to ski the technical events at the end of the nine-day program, Graham said: “I think he’ll try. But he won’t ski the speed events at all. The risk of re-injuring it (knee) or making it worse is the big thing.

“We’ll just  have to see how it recovers over the next week and whether he can ski in his pet event, which is the slalom, without risking further injury.’’

Graham said the deteriorating snow conditions were not unsafe for Paralympic competitors.

“After the Olympics the snow has rotted a lot. Then once you put more salt on it, it highlights all the irregularities on the course. It was to be expected and there’s not much we can do about it,’’ Graham said.

“I think it’s still safe; I don’t think there’s a problem with safety, and that’s the biggest thing at the moment, but it’s far from ideal.

“ It’s as much the course set as the conditions,’’ he added. “It’s a very irregular course. Due to the conditions they’ve tried to make it safer by slowing it down. So therefore you have big, fast turns, and then all of a sudden a controlled turn.

“That’s (number of DNFs today) not a high number – there was more last year in the test event.’’

Rahles-Rahbula took a philosophic attitude to what turned out to be a dramatic day for the Australian ski and snowboard team. It also follows sadness last month with the death of national squad member, Matt Robinson, during a snowboard cross race at a World Cup in Spain.

“Ski racing is unpredictable – I’ve always said that – these things happen,’’ he said.

“In saying I’ve had a severe injury, look you get a lot worse than this. And obviously the whole Paralympic team has been affected by some pretty severe times with the loss of Matt (Robinson).

“In the scheme of things, yes, it’s a severe injury and it’s terrible timing, but I’m still up on my feet. The long term prognosis is pretty good so that’s a good thing.’’