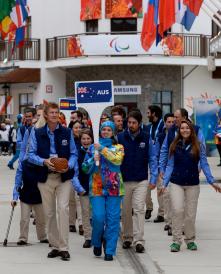 The Australian flag was raised in the Mountain Village at the Sochi Paralympic Games late on Tuesday amid Russian fanfare and tradition.

The women dressed in fur hats, fur-line skirts and white leather boots were eye-catching as they danced and beat a rhythmic welcome to Australia and the four other countries – Spain, Mexico, France and the Czech Republic – which had their flags raised during the ceremony.

Nunn moved forward to offer a gift of a beautifully-carved wooden bowl made from a blue gum eucalypt tree.

Then 15 Russian military officers, dressed in the traditional fur hats and heavy coats of the famous Cossacks soldiers, marched into the arena – three for each flag pole – as they raised the national flags while the anthem for each nation was played.

After the Australian anthem finished, three athletes – Jess Gallagher, Toby Kane and Tori Pendergast – were invited to sign the `Welcome Wall’. It was erected in support of the United Nations convention for the rights of people with disabilities.

Nunn said the Village welcome ceremony was where national pride and competitive spirit came together.

“Particularly for athletes who haven’t been to a Games before, to have them come in and experience the euphoria of being part of a Games Village, it’s a very special moment,’’ he said.

“It doesn’t matter how many times you do it it’s the significant moment in starting the whole Games experience.’’

For the Australian team, it had been a frustrating 24 hours leading up to the flag-raising ceremony with several athletes not having all their luggage arrive in Sochi.

But just hours before the festivities started, all the Australians’ items of missing gear had been located.

“We’re absolutely delighted,’’ Nunn said. “Our ski technicians especially as we had $10,000 worth of (ski) wax just sitting  on some airport trailer that we now have back again to prepare our athletes for the (racing) hill.

“So we’re ready to go, and the bags being here will make it business as usual tomorrow morning.’’

The snow conditions have deteriorated further since the Olympic Winter Games ended on February 23, although there was a small amount of fresh snow on February 27. But the warm temperatures have made things challenging for the Sochi organisers.

But Nunn said neither he, the Australian coaches, or athletes, were too concerned.

“If this weather stays like it is we’re actually in good shape for racing,’’ Nunn said.

“In some ways it could be an advantage for us because it’s not unlike what we encounter in Australia. I’m not worried about the conditions,’’ he added.

“It’s the readiness of the team and we’ve got the athletes settled and excited to race. Some countries experience a lot of good conditions but in Australia it can be hit and miss at times. That’s an advantage for us because we’re used to being dynamic in a changing environment.

“I went to the race course meeting yesterday and the race organisers are extremely confident we’ll have good race conditions.’’