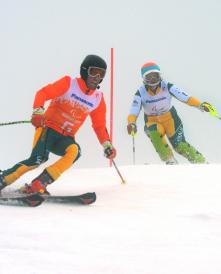 An innocent mistake has turned into a very costly one for the Australian Paralympic team at the Sochi Winter Games.

Two-time Paralympian Melissa Perrine was yesterday disqualified from the Super Combined (Super-G, Slalom race times added together), after only one half of the event had been completed, for using an illegal piece of sporting equipment.

The oversight has caused embarrassment for the Australian Paralympic Team competing in Sochi.

“This is simply a very dumb mistake by a number of people,’’ said Australian Paralympic Committee CEO Jason Hellwig.

“Everyone absolutely understands that this sort of error is inexcusable and not acceptable. It must never happen again,’’ he added.

“I’m absolutely confident it won’t happen again here in Sochi. Once the Games are over we will look at this in more detail and understand what needs to be done in the future to ensure all staff and athletes are fully informed of their responsibilities in their performance.

“Being compliant with equipment rules and regulations is one of those responsibilities.’’

“There is no question that anyone is trying to undermine the integrity of the Australian team or the competition.

“This is just one of the dumbest ways to lose a performance you can possibly imagine,’’ Hellwig added.

Perrine and Bor were sitting in second position for the vision-impaired class after the Slalom run – the first part of the Super Combined contest.

But she attached a visor to her helmet to shield her eyes from bright outdoor floodlights that had been turned on to illuminate the Rosa Khutor course due to fog and rain.

Perrine and Bor had used the visor before at a World Cup race to shield the 26-year-old’s eyes from direct, intense, sunlight and no-one had questioned them.

Australian head alpine coach Steve Graham had asked them to check to make sure their home-made visor complied with International Paralympic Committee (IPC) rules for the Sochi Games.

But Chef de Mission Chris Nunn said no-one ended up checking as it was up to the whole team of alpine staff, coaches and athletes to make sure they followed race rules.

The consequence of not doing so had cost Perrine and Bor a possible medal, Nunn said.

“Mel and Andy are bearing up as well as can be expected, and everyone is sharing the responsibility. This is not a mistake by two people on their own,’’ Nunn said.

“From our perspective we’re annoyed about two things: one, we’ve compromised a performance result; and two, there was as lack of attention to detail by staff on the winter program.

“We met with all the staff and they have been given clear instructions to check all equipment and make sure it’s compliant.

“We will not tolerate any further breaches,’’ Nunn said. “But we move forward and get on with the program as we still have athletes ready to compete and we want to compete to the best of our ability.’’

Both Hellwig and Nunn said no-one on the Australian team had tried to seek an unfair advantage.

“The breach of rules was unintentional,’’ Nunn said. “I am completely happy there was no intent by anyone on this team – no staff member or athlete – to bend any rules.’’

Hellwig added: “Chris and (APC general manager of sport) Michael Hartung have spoken to all the staff and athletes. There is absolutely no intention here by anyone to gain any advantage.

“This is a process failure. The number of staff who didn’t know the rules or didn’t check the rules is concerning,’’ Hellwig said.

“The specifics as to how that happened is something the team management has talked about at length with Chris.”

Perrine did not use the visor in her first two events in Sochi  – the Downhill (4th) and Super-G (did not finish – missed a gate).

The events were raced in vastly different conditions to the Super Combined.

Perrine will race the stand-alone Slalom today (Wednesday) and the Giant Slalom on Sunday.

The Winter Games finish with the Closing Ceremony on Sunday night at Fisht Stadium.