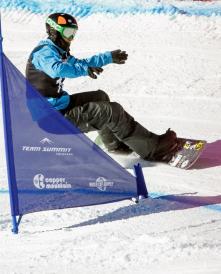 The Australian Paralympic Winter Team will wear sky blue armbands this week at the final IPC Alpine Skiing World Cup before the Sochi Games, in honour of teammate Matthew Robinson, who passed away on Friday.

Rather than wearing traditional black armbands as a mark of respect, the team will wear Robinson’s favourite colour as they come to terms with the tragic loss of their teammate and friend, while continuing their final stages of preparation for the Sochi Paralympics which open on March 7.

Robinson suffered serious neck and spinal injuries in a race accident while competing at the IPC Snowboard World Cup finals in La Molina, Spain earlier this month. He passed away on Friday after he went into cardiac arrest on board an Air Ambulance flight back to Melbourne and could not be revived.

“Snowboarding is a dangerous sport but you never think something like this could happen to someone.

“We’ve got permission from the IPC to wear armbands at this event to pay our respect to our teammate – he’ll certainly be in our thoughts in everything we do in the lead up to and during the Games.”

Australia’s alpine skiers Toby Kane, Cameron Rahles-Rahbula and Melissa Perrine will compete in the downhill and super-combined events at this week’s World Cup finals in Tarvisio, Italy, while the team’s three snowboarders continue to train in Germany.

Graham says the focus for athletes this week is feeling comfortable in themselves and their race plans ahead of Sochi.

“It’s not really about medals this week. With Sochi so close, it’s now about fine tuning and finding some really good rhythm in the lead up to the Games,” he said.

With unseasonably warm temperatures across much of Europe in recent weeks, the Team has struggled to find good snow on which to train and compete, but Torino 2006 bronze medallist Toby Kane says unpredictable snow is just part and parcel of winter sport.

“We can’t seem to take a trick at the moment with the snow,” said Kane.

“In saying that, we’ve done some incredible training in Austria on salted snow, and in the wet. Not ideal but I don’t know how ideal Sochi is going to be.”

Kane will join fellow one-legged skier Cameron Rahles-Rahbula in the men’s standing competition this week and hopes good times and the chance of a medal will add to his confidence ahead of Sochi.

“I just want to ski with good mentality, ski hard and ski the way I want to ski in Sochi,” said Kane.

“I think a medal is good at any time – it’s good for your confidence, and good to know you’re skiing quick.”

Racing in Tarvisio begins tomorrow and concludes on Thursday. The full Team then heads to Sochi on 3 March, ahead of the Paralympic Opening Ceremony on 7 March, 2014.