Para-equestrians count down to WEG 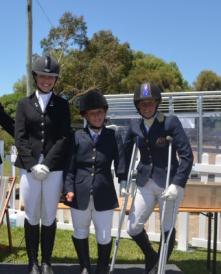 The countdown to the 2014 World Equestrian Games is well and truly underway for Australia’s elite Para-Equestrian riders with the second observation event for Australian based contenders concluding this weekend.

The Boneo Park CDI3* played host to Para-Equestrian classes for the first time in 2014 and the event  attracted a strong number of entries, including a host of WEG hopefuls eager to post strong scores to help their bid for one of the four team positions.

In order to be eligible for selection to the team which will compete in Normandy, riders which are campaigning from Australia need to compete in two of the three observation events. The third will be held in Sydney from 18-20 February and the first was staged back in December at the Saddleworld Victorian Dressage Festival.

National Performance Director for Para-Equestrian, Julia Battams was impressed with the progress being made by riders.

“The national dressage and Para-Equestrian clinic which was staged leading into this event has certainly been of benefit to our riders and this is reflected in the scores from the weekend.

“We have a number of riders challenging for just four positions on the WEG team and the healthy competition has led to some very good scores.”

The weekend didn’t go to plan for 2010 WEG bronze medallist Sharon Jarvis after her horse Lets Imagine suffered a minor foot injury just prior to the start of competition.

Her disappointment was slightly alleviated by a kind gesture from a former team-mate.

“When Jan Pike found out Lets Imagine had been ruled out, she asked me if I wanted to share her ride Cocon, so I rode him in the grade three while she rode him in the Grade IA.

“Jan and I were team mates in Beijing and I found this to be such a lovely gesture. It really picked me up after I found out that my horse couldn’t compete here this weekend.”

Jarvis is hopeful her mare will be fit for the final observation event in Sydney.

“We’re confident it is only a minor issue and that she’ll be ready to compete in time for Sydney,” said Jarvis.