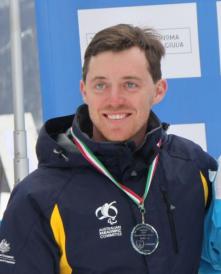 Australia’s Toby Kane has won gold in the men’s standing super-combined at the IPC Alpine Skiing World Cup finals in Tarvisio, Italy, just days out from the start of the Sochi 2014 Paralympic Winter Games.

The 27-year-old Melbourne athlete edged out the world number one Alexey Bugaev of Russia by 0.01 of a second to claim his first ever World Cup gold medal in his 12 year career.

Currently ranked 14 in the world in the super-combined event, which combines both super-G and slalom, Kane sat in second place following the first super-G run, two seconds behind Austria’s Markus Salcher, but was able to blitz the slalom leg to win the event.

“I’m ecstatic. It’s not so much about Sochi right now – I’ve been trying to do this for the last 10 years and never quite got over the line,” said Kane.

“I’ve led races before, I’ve been beaten by very, very small margins but I’ve never made it there. So in what is most probably my last World Cup, I’ve had my first win.”

Kane, who has indicated he may retire following the Sochi Games, won a bronze in the super-G as a 19-year-old at his first Paralympic Winter Games in Torino 2006, but was unable to win a medal in Vancouver four years ago. He says the win today was not only a life achievement for him personally but was a tribute to team mate Matthew Robinson, who tragically passed away last week.

“Today it ranks up there because I’m standing on top of the podium. While it’s great to be second and third and have a medal around your neck, to be the fastest down the course is what every skier out there wants to do so I’m really happy. It’s probably the largest monkey I’ve ever got off my back,” he said.

“We can’t bring Matty back and we can’t replace that incredible loss that his team, the snowboard team and us, and his family and friends are feeling, but we can go out there every day and do our absolute best to honour his memory.”

Australian Paralympic Winter Head Coach Steve Graham said Kane’s win had not only boosted the 27-year-old’s confidence heading into Sochi, but had lifted the spirits of the entire team.

“It was a challenging course set, it was quite an aggressive course set and he just kept pushing at it and kept taking it down the hill – he fully deserved to win,” said Graham.

“When we heard news of Matt, everyone was pretty low. We discussed that the best way we could honour him was to do our job and put in the best performance we could, and for Toby to win today in what is most likely his last ever World Cup race, to win his first ever Word Cup race is really great.

“It’s like going into a bye with a win, it just makes you relax and I know it will make me sleep better leading in to Sochi. We’ve got a few days off now and the guys go into Sochi knowing we can win.”

Fellow teammate Cameron Rahles-Rahbula did not finish after missing a gate in the super-G, while Melissa Perrine did not compete.