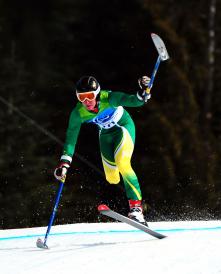 Torino 2006 Paralympic bronze medallist Toby Kane is playing down the World Cup bronze medal he won in the men’s downhill standing overnight, just nine days out from the start of the Sochi 2014 Paralympic Winter Games.

Competing at the final IPC Alpine Skiing World Cup before the Sochi Games, Kane completed the speed course in 1:03.32 seconds, and was 3.61 seconds behind Austrian gold medallist Markus Salcher and 0.7 of a second behind Salcher’s Austrian teammate and silver medallist Matthias Lanzinger. Fellow Australian Cameron Rahles-Rahbula finished in eighth place.

It was Kane’s first medal for the 2013/14 World Cup season but the 27-year-old was quick to squash expectations and unnecessary pressure on him leading into his third Paralympic Games, after he experienced a less than ideal Games in Vancouver 2010.

“I think a medal is good at any time – it’s good for your confidence and good to know you’re skiing quick.  In saying that, I won three medals at World Cup finals in the lead up to Vancouver and we all know how that went,” said Kane, who twice finished 10th and recorded two DNFs in Vancouver.

“I am happy with it today but I’m more so happy with the way I skied. I stuck to the plan and executed the plan and I think that’s what this week is all about for me,” he said.

“But it’s a shallow field and there are countries that have decided not to come here in the lead up to Sochi. So it is what it is and you can only really beat who’s here, so I’m happy to be where I am.”

Australian Paralympic Winter Head Coach, Steve Graham was more optimistic about both Kane and Rahles-Rahbula’s performances given the training both have had since the squad arrived in Europe earlier this month.

“Given the lack of good snow in Europe, the last two days have been perfect training for the boys prior to Sochi. A very fast and straight course suited the guys well and helped get them back up to speed after really three weeks of only training slalom and the occasional giant slalom session,” said Graham.

“We’re just hoping for a few days of really good conditions so the guys can get out there and compete and get themselves as prepared as possible for the Paralympics. The team’s ready to perform to their best at the Sochi Games and are eager to do their country proud.”

Both Kane and Rahles-Rahbula will compete in tomorrow’s super-combined event, with vision-impaired skier Melissa Perrine forced to pull out mid-way through the downhill competition due to illness.